A Weaponmaster can be two things; it is either the title of "Weaponmaster" as is given to the individual who places first in the warskill events at the Weaponmaster/Dragonmaster event, Or it is the name of the tourney itself. 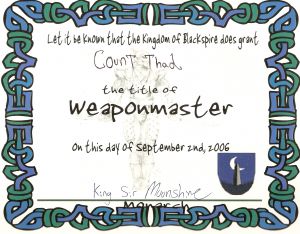 An example of the paperwork given to a weaponmaster. This one is from the kingdom of Blackspire.

Weaponmaster is one of two tourneys held in a six month period, or reign. In most kingdoms it is one of the tourneys that you can win to help qualify you for your sword belt. It is almost always a very difficult thing to do, and there are very few who have ever held the honor.

Running a weaponmaster tourney in most kingdoms falls to either the Champion or the Guildmaster of Reeves. For instance in the Celestial Kingdom it is the GMR's job, and in the Wetlands it is the Champion's. Many styles of weapons are used for weaponmaster. In many Kingdoms it is outlined in the Corpora which weapon styles must be used. In others it is the resposibility of the person running the event to decide which styles to use.

In some kingdoms, it is the duty of the Weaponmaster to assist the Champion in all duties. If the Champion is ever unable to fulfill the duties of their office, the Weaponmaster assumes full responsibility in their stead. In most kingdoms the Champion's duties would be filled by the next officer in the Order of Succession as outlined in the BL Corpora. 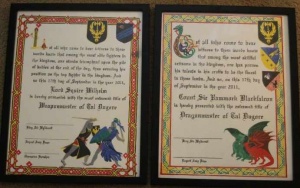 A Sample of weaponmaster events

From the Wetlands Champion Sir Margul

Weaponmaster will be held in Darkmoor at Wuthering Heights Park in Beaumont on Sunday, June 10th. Sign-in is from 10:00am -11:30am, and the tournament will start at 12:00 noon. There are 8 events, and each match will be judged by best 2 out of 3 (yes, that means you'll be fighting each opponent more than once).

Combatants are urged to bring their own weapons -- none will be provided.