MaA Lord Venku Stormkin of the Shire of Glass Fjord Highlands, in the Kingdom of Dragonspine

”Come on the five of you can take me. I'm not that scary”

"Ok now that I can feel my legs again, Let's fight!" 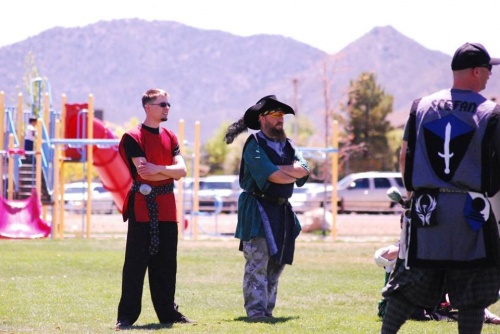 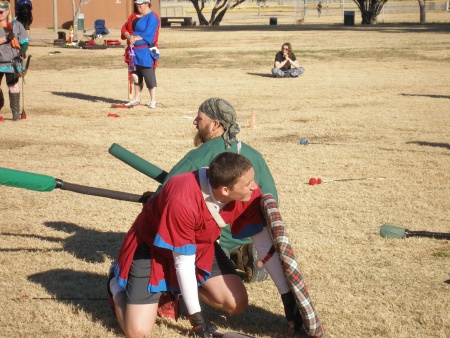 Venku was born in a kingdom far from here called Ylesia. The son of a forbidden love between a wandering mercenary of the Akkaar called Shysa, and a warrior priestess of a mystical order named Etal.

The laws of the order forbade its members to marry or have children. Deep passions such as love and hatred were seen as weaknesses. When an individual rises above their own desires they become part of a greater design.

The kingdom of Ylesia was beset by civil war. The ruler, King Leyras, had hired mercenaries against the dissidents, while Etal's order was bound to the defense of the Kingdom.

The dissidents, led by the dark warlord Neroth, sought to dethrone Leyras and destroy the order.

While the fighting in the Valley of Territh was fiercest, Shysa was wounded and Etal, with her arts of healing, was tasked with his care and protection. Despite her training since youth to resist emotion and shun attachment to others, she loved him, though to do so would mean expulsion from the order that was her life . After Shysa was restored to health they fought together in battle after battle, on field after field.

So skilled was Etal at masking her feelings, that Shysa never suspected there was more to her defense of him and his brothers than simple duty. So when he found himself desiring her company above that of his kin and his men, he took her aside and told her of his heart's cry. Etal wept as she also confessed her feelings. Etal and Shysa were wed secretly days later as the host traveled.

As the war ground on Etal found herself ill more often than not. Soon she feared that she was with child. Telling Shysa only that she was being recalled to the order's temple, she left the company of the Akkari Mercenaries and the army. Over the course of the next months, Shysa was well honored by Leyras for his deeds and valor but longed to see Etal again.

One night Etal stole into the mercenary camp carrying a bundle and crept into Shysa's tent. He awoke at once, both wary of her silent coming and glad to see her again. She motioned him to silence and handed him his son Venku, a strong child born of strong parents. Shysa asked how Etal had hidden the pregnancy from her order, but she refused to tell him, saying only that if the truth were known a dear friend would come to harm. Shysa and Etal agreed that an army is no place to raise a child, and sent him to live with Shysa's kin in his homeland far to the south and west.

A day arrived while Leyras' armies were camped near the river Nagya that Neroth's forces moved by night to attack them as they slept. The massacre was swift; most of Leyras' army was unable to resist the sudden onslaught.

The Akkari encampment was a short way off from the main camp. The mercenaries, upon hearing the din of war, rose up to the sight of fire and smoke. Shysa, aware that the order kept its quarters in the center of camp nearest the king, marshaled his troops to battle. They attacked as a spearhead driving into Leyras' camp. As they drew near the order’s tents they saw a veritable wall of dissident corpses piled around the king’s dwelling. The warrior monks of the order were holding the line against the armies of Neroth.

Shysa called out to the monks his name and company, and they joined the monks in defense of the king. As they battled, Shysa saw Etal standing atop a pile of corpses locked in a struggle with Neroth himself. Shysa moved to her aid, but the warlord struck a savage blow that toppled Etal from her perch. As she lay before him, he called forth a weapon forged of dark magics and smote her.

Shysa, enraged by this sight, charged Neroth and drove him back. Upon seeing the fire and rage that shone in Shysa's eyes, the warlord cloaked himself in shadow and fled. Once the warlord's army had seen their master flee they also began an unorganized retreat. Shysa ran to Etal's side fearing her lost. As he approached she raised her hand to him. He took it and listened as she bade him to take his company and return home, to care for their son. Shysa said,

"How can I do this? I have sworn an oath to this king and this kingdom! Would you have me forsake it?" "Yes!" she replied. "I may never see Venku again but he will have a father. Please tell me you will go so I can find peace." "I will," he answered. "You are more to me than my honor." After hearing this Etal closed her eyes and passed beyond the veil.

True to his word the Akkari mercenaries left for their homeland that very day. Thus Venku was raised a warrior and mercenary like his father. Told of his mother, her deeds, and her dedication to her order, Venku set out on a pilgrimage to her homeland hoping to find the fate of her killer. If Neroth yet lived Venku would have vengeance on him. If he had fallen, then Venku would return to his father bearing tidings that the matter was settled.