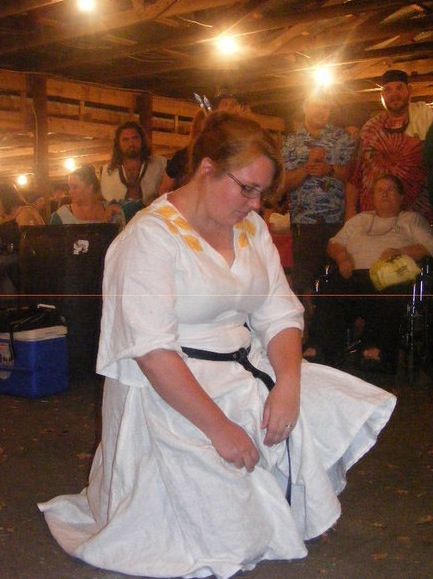 Mostly known for her work in the arts, as a scribe and garber, and in service to the game as an adminstrator for many of Amtgard's online resources including; the ORK, Wiki, contracts contact, annual audit, and various facebook groups. Linden continues to support members of her prolific beltline and her friends in the game, but is much less active than she once was. She now participates actively in the SCA and was asked to join their order of the Laurel in March, 2020, and was elevated in May of that year. She is one of a three known to be both a serpent knight in Amtgard and Laurel in the SCA. 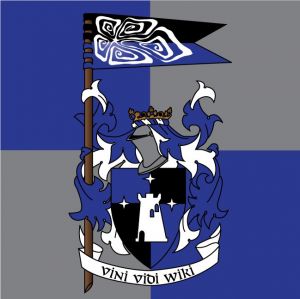 In 1999, after several years in the CK Linden returned to her home state of Louisiana and played briefly at the Duchy of Crimson Moon under the Wetlands. Spending barely a year abroad, Linden returned to Texas and joined the Duchy of Tori-Mar where she played until it was disbanded briefly in May of 2007. Her last regular park was Nocturnis in Cedar Park, Tx. Now a days she is mostly found on the internet particular the A&S Anonymous and Scribal Guild groups, or teaching at events, like the Arts and Sciences Symposium.

Linden’s first love was fighting, but over time she found that in order to have people to fight; the game has to function properly. So in 1997 she began holding local office. Over the next few years Linden spent most of her time in some position or another eventually she had held every in game office from the park level up. This being a convenient and still challenging way to be involved while she was assembling her brood of three children; Quinn, Nicoli and Genevieve. Later on she would add two more, twins Ethan and Eleanor. She was the 24th Champion, the 26th, 28th, and 29th Guildmaster of Reeves; the 27th Regent, the 30th Prime Minister, and the 33rd Monarch and the 34th GMoK of the Celestial Kingdom. She is one of two women in Amtgard to have accomplished this feat ever, and the first person ever to hold all four, or five in the CK. Linden has been awarded many titles over her tenure including that of Defender for her stint as the first female Champion of the CK.

She also acted as a regular autocrat, running several kingdom events, demos, and classes. With her Co-Autocrat Chango she ran Spring War 2006: Yooks Vs the Zooks, based on a popular Dr. Suess book on the escalation of warfare. The event drew more that 500 people, and put the CK back in the black, and reconfirmed Spring War's status as the largest Amtgard event at the time. Since then several other events have eclipsed both the attendance and place of spring war as one of the "Big Three". During her reign as Queen of the Celestial Kingdom, Linden went to war with the Wetlands in the person of the zombie king Slyddur. Raids were held back and forth, at Murky Waters and Mordengarrd culminating in a battle at the following Spring War.

In the later part of her career she spent her time up keeping the old online record keeper, and and the Amtwiki, as their administrator. She also spent a lot of time welcoming new chapters to the game, and coordinating the yearly amtgard audit from 2008 until 2014. Later most of these duties were handed down to her Grand squire Tye Dye. Together, they were invited to present a keynote address on their report at the Living Games conference, which is an academic conference for larping. You can hear their talk, [1]. In 2021 She helped consult with the new team for the annual audit, led by her Squires Kite and Alona

Linden also enjoys making garb and award documents for players across the country. As a personal challenge she sought commissions from each of the Kingdoms, and in 2012 after making more than 70 individual awards she successfully made a custom award for each of them. Scribes who now make the same challenge, are awarded a golden quill by the Interkingdom Amtgard Scribe's Guild. Linden continues to make scrolls for friends and as well as commissions for players all over the country in amtgard, SCA, and for mundane clients. She has also been honored to produce a Kingdom charter for Desert Winds, Tal Dagore, Northern Lights, Westmarch, Rivermoor, and North Reach upon their achievement of Kingdom status.

During the pandemic in 2020-2021, Linden taught classes, and participated in panels and A&S competitions. And adopted the shire of Griffon's Heart, of the principality of 13 Roads, under Tal Dagore as her second if virtual home. Her activity was somewhat limited by an aneurism which happened in late July of 2020.

Linden has challenged herself to earn a unique title from every kingdom. So far, she has only accrued four since 2009.