”People are like unreasoning animals, born as creatures on instict to be caught and destroyed, and like such creatures, they too will be destroyed. 2 Peter 2:12” 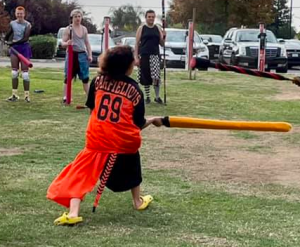 One day Jon was coming downstairs to feed Garfield, but on his way downstairs he trips over Odi, who is sleeping on the stairs, hits his head on the corner of a stair and dies. After a few days of eating whatever food is left in the house Garfield finally has enough and leaves. He travels into the forest, hungry and lone and runs into the Fire Clan (from The Warrior Cats books series). Using his knowledge of human society he slowly ascends the rankings until he becomes the leader, Garstar. He later has a litter of kittens and chooses one of them, Garfielious, to he the next leader of the fire clan, and raises Garfielious with this knowledge. However, as Garfielious grows older and sees are the war and bloodshed that surrounds the clans of the forest, he grows tired and scared, thinking he cannot lead the Fire clan and handle all the war that surrounds him. Finally, Garfielious has enough and leaves, fleeing to the farthest parts of the woods. There he runs into a witch, Madam Leane, she takes pity upon him and takes Garfielious under her wing.

From that day forth Garfielious ran errands and did small tasks for the witch: gathering materials to make potions, rodent control, and just guarding the tree the witch lived in. One day while the witch is away some boys from the local village end up breaking in and wrecking the tree, smashing potions, tearing her clothes, and setting the tree aflame. Horrified and scared Garfielious hides nearby and watches in horror as the boys destroy Madam Leane’s house. A few hours pass by and Leane returns, only to find her home destroyed, and her one friend, that she loved and trusted, had watched it all happen, and did nothing. Furious by Garfielious’ actions she curses him to be human. Scared and confused Garfielious runs away, to the only other place he knows, home. However upon finding the location of his home a mysterious force prevents him from stepping foot into the magical forest where his father presides. He falls to the floor, in shock, Madam Leane took the only thing that mattered to Garfielious, the only thing he had left in his life, his father.

Garfielious now roams the earth, searching for Madam Leane, with the hopes he can undo his curse and one day again see his father. To remember his father and keep his name alive Garfielious makes his weapon and armor in Garfield’s memory, putting his father’s face on as much things as possible, as to not forget him.

One day during a hunt Garfielious had wandered into a vast cave system, he was searching for a goblin who had stolen some loot from a local traveling merchant. Suddenly he feels himself ascending, hovering as a bright glowing light shines above him, he fades from consciousness. Awakening, Garfielious finds himself in front of a man appearing to look like his fallen grandfather, Jon Arbuckle.

“Oh, hey, there was a mistake with an angel who grabbed the wrong soul, but I thought I’d talk to you before we dropped you back on earth.” the mysterious man spoke.
“Where… Who…” Garfielious stutters, unable to process where he is.
“Well I’m God, but right now I’m in the form of your grandpa, Jon. This is what you see me as.”

God proceeded to explain that they will take the form of whatever being they are perceived as by who they are speaking to. They have appeared as many beings to others such as: parents, famous actors, and even cartoon characters.
“I’ve been watching you, my child”
“You have?”
”You have a greater purpose in life, and I have a mission I need you to fulfill for me.”

God stands up and Garfielious follows, they walk through hall after hall until they arrive at a large wooden door decorated with elaborate carvings of lions, hawks, and buffalos. Opening the door reveals a large hall with rows and rows of wooden desks and chairs. God gestures to the seats, “This is me, all of me” God says before dissipating. Hundreds of glowing orbs flow from where they once stood and flow to the various seats, materializing as various humans, beasts, and creatures. The once quiet hall grows loud as they all peer down at Garfielious.

“We, the collection of souls of the century [REDACTED], call upon you, Garfielious, to guide the soul of your father back onto his path.”
“My… my father?”
“Your disappearance from the forest has caused your father to grow angry with wrath and gluttoness with desire for things he shouldn’t have.”
“My father would never-“

A tabby cat jumps atop one of the tables and wanders over to Garfielious, the cat’s eyes glow as it peers deep into garfielious’ soul. The cat gently sets a paw atop of garfielious’ shoe.

“We simply need you to return to the fire clan and become leader, it was what you were prophesied to do, without you there by your father’s side he’ll never ascend to heaven and join us.”
“Join… you?”
“We are a collection of souls from the previous thousand years, together we form God, we make the decisions and decide everyone’s fates.”
“My father… will become God…”
“He’ll be a part of God, we all are all a part of God.”

The cat wanders off and gestures for Garfielious to follow, “You two will join us, as a Thrones.” As soon as the cat speaks, a large eye with golden circles encircling it appears. It speaks in harsh sounds, incoherent to Garfielious’ ear. “The chariot of God, you will serve us for eternity and stay right by your father’s side.” The Thrones looks at Garfielious, seeming to pierce right through his very soul. This was Garfielious’ fate, this was his destiny.