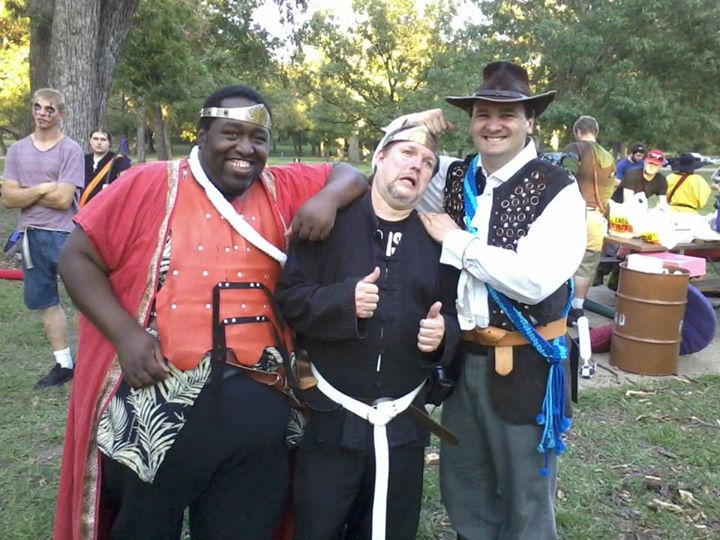 There are those people that becomes a part of the fabric of a Kingdom. Clu is one of those people. His enthusiasm for the Game is infectious, and you can't help but have fun when he's around.

Clu is the Patron Saint of Bards for a reason. For a while, it was rare to see any performances at events, but he made it a goal... No, an obsession to make sure that the art of Bardic survived. He would always be found at a campfire on event nights with his hat and at least a few volumes from his Neverending Songbook to suppliment his already impressive repetoire of songs. (And more often than not, a Newton full of songs too.) The music would frequently last until the wee hours of the morning, and sometimes dawn. It was on one of these extended Bardics that the Bard Patrol was born. It's like a Dawn Patrol, but rather than people yelling and making general noise, it was bright and happy singing from camp to camp. Many claim such cheerfulness on a Sunday morning is worse than random banging or screaming.

Clu is sometimes referred to as Clu the Conqueror due to the fact that he doubled the size of the Emerald Hills during his reign as king in the Winter/Spring of 1998. During his reign, the Emerald Hills Acquired at least 5 new groups including A reborn Ironcloud, Mourningwood Glen, Cuiviëdôr Amarth, Dragonstar, and Rising Winds. -Heralded by Donnovan Sunrider

Goodwyn Clu son of Goodwyll Clu who was the son of Goodwyne Clu, (and so on) was raised in a Celtic tribe in a family with a long linage in the bardic traditions. Early accounts of the family name were spelled "Llw" but became more commonly known as "Clu" over time. "Da'Bard", also the more common translation, was the occupation in the tribe as one of the bards who maintained the tribal history, records, and helped the druids in ceremony and healing. And so it was during his time in the Barony of Ironcloud.

After many adventures, Clu would learn his true origin: That he was exiled from another world. The capsule that brought him to the Amtgard world would take the form of a tree in a large forest. It would take Clu years to remember the capsule and then years to find the right tree, and then years to figure out how to open the hidden door on the tree. Much of this happened in the Duchy of Midnight Sun.

After the capsule was reactivated Clu would be re-united with his true people of the world of Gallifrey. Soon he picked back up his role in an much more ancient linage than his adopted Celtic family to monitor space and time as a Timelord.

Monitor duty turned out to be extremely boring work after his life of adventuring in Fantasy realms. After a while Clu would go on "field surveys" and explore lifetimes as various races observed. Sometimes he would simply appear in his capsule on a stage, perform, and then disappear. But most of all Clu had an attraction to the Amtgard world where he remembered growing up.

When he returned to the Amtgard realm, eventually became king of the Emerald Hills for over half a year. The kingdom was doubled in parks and populace, one such park being Mourningwood Glen. The Rising Winds was founded as an outpost to the Emerald Hills during that time. And along with many of the adventures, quite a few happened at the Borderlands.

The reign ended with a kingdom united, larger, and with donated land known as Tanglewood Forest to camp on for the next fifteen years.

Clu Spent his years after his time as king building up his home park for years at Mourningwood Glen eventually with all in the park victorious as it became a Duchy. Clu served as it's Champion, Regent, and Duke while also eventually serving as Prime Minister for the Kingdom of the Emerald Hills. The bard was eventually knighted not for years singing and other arts, or for years served in various offices, but as a Knight of the Flame for "running events and bardics for a decade". The Timelord bard, now knight, found this alternative hilarious.

Over the years at Mourningwood Glen learned of the "duchy curse". Clu helped rebuild the park as Sheriff from Shire to Barony. And while rebuilding a park for the Emerald Hills, and while serving in a park office, that after six years of being qualified for a Crown Belt that he no longer qualified due to rules changes. The Timelord Bard found humans... hilarious.

Despite this gut punch, the bard would continue to grow his kingdom, and would help contribute the spark that would re-ignite a former park home of his, the Shire of Midnight Sun, from the dying ashes and on their way back to their eventual victory to Duchy.

Despite his affection for the Amtgard world and his loathing of monitor duty his responsibilities as a Lord of Time would soon call him away once again. In a great war throughout all time and space it was believed his birth world of Gallifrey was destroyed. However in a relatively short time later he would learn that his world was not destroyed but hidden by another of his race to escape destruction. Working with what few others of his race he could find together they strive to find and restore their homeworld. Their long search for Gallifrey proceeded.

From time to time during the quest to recover Gallifrey the ancient bard has been seen appearing on a stage, in a bardic, or at Karaoke nights for a musical fix every now and then.

(See Rallan Glintsong as the players' other persona during this intermission.)

After decades of searching for his home planet Clu took a break and hung out with the Corsairs for two years. One night at a Corsair party and copious amounts of rum the Timelord stopped overthinking and got a hazy inspiration. Somewhat groggy the Timelord enacted a plan that only other drunkards would cheer and others would run in terror. The plan miraculiously resulted in snapping his home planet out of it's frozen state. The process was fatal to the Timelord, triggering one of his regenerations, but otherwise had minimal galactic destruction and no harm to any other sentient life.

Quitting while he was ahead he left his home world spinning and alive again though at the end of time. The Timelord figured that would be safer for his home world from would-be invaders, since everyone else would be dead, and piss off the other Timelord, The Doctor, who was also looking for his homeworld. Smiling on that last thought Clu returned to Amtgard to re-unite with his Corsair brothers and sisters. 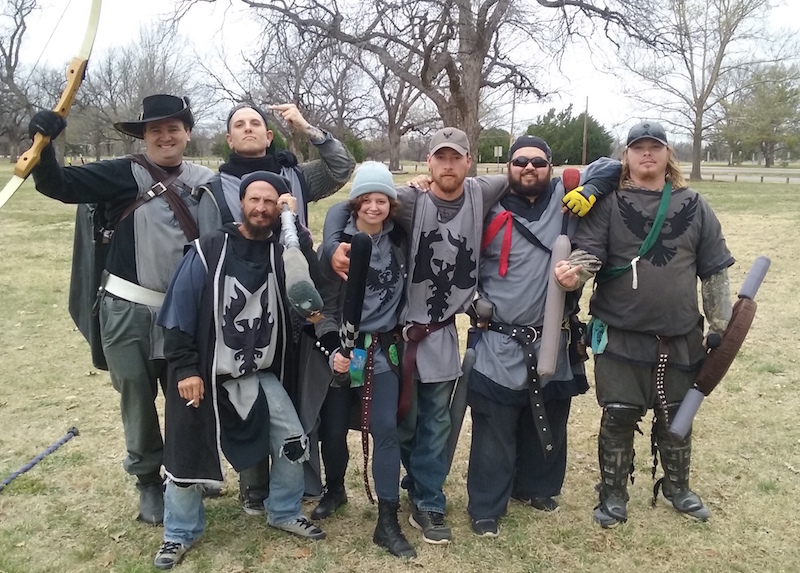 After a series of adventures and misadventures, Clu found himself in exile from the kingdom he had served for nearly thirty years. The reasons in summary was a disagreement, as no established procedure was broken, with a Monarch while serving as Prime Minister. Essentially told through the Monarch by a faction that rose to power to "be anywhere but the Emerald Hills". The Timelord Bard finds this .. an interesting way to advance the plot.

So Clu pondered a new course for nearly three months, as one door was closing, found a welcome open door from Queen Lirael of the Celestial Kingdom for a new land to belong.

It was at the northern threshold of the Celestial Kingdom at a point called Hero's Pass where he reaquianted with old friends from the Borderlands and made new friends. As the Emerald Hills began a reign of piracy under new monarchy. Clu, as a Corsair, offered his services to Queen Surreall of the Celestial Kingdom for a letter of Marque to defend northern waters. And so agreed to sail the northern seas as one of her "Dread Pirate Roberts"!

After a while, the bard's exile from his former Kingdom expired. While trying to visit the old lands, found his previous kingdom locked in time. Though his former kingdom mates called out for help, and the bard provided them the help and information, they were unable to free themselves. Saddened the Timelord realized they would find a way for all of them to be free.. in time.

In the meanwhile the Timelord Bard journeyed on, having many adventures in the Celestial Kingdom, enjoying Spring War and other events with a delightful variety of new places and faces alongside some older faces from other lands.

Started as a D&D character inspired by Fflewddur Fflam of the Prydian series by Lloyd Alexander. The first appearance was on the Unknown BBS message board D&D game. On that BBS the alias was "The Clu" based on the program from the first Tron movie. Goodwyn was added as the first name, inspired by the player's real last name "Goodwin", and "Da Bard" was flippantly added to the end.

Clu Da'Bard was simply a Celtic and Welsh bard till around 1992 he was hailed by Ironcloud members singing "Doctor Clu" to the tune of the "Doctorin the TARDIS" theme by The Timelords. The idea matched the garb and stuck from that point on.

Household - Tavern of the Drunken Wyvern

Clu was once squired to Sir Calvin MacDruin around 1993-1994 and later to Sir Martello a few years after that.