A Duchy of the Celestial Kingdom, located in San Antonio, Texas.
"At Traitor's its the Shank from behind, and the Leg 'em and Leave 'em." 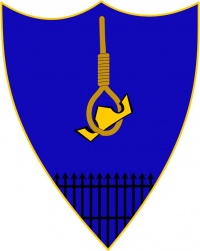 Heraldry for Traitors changed in 2010

Founded as a barony early 1998 by the merging of Traitors Hollow and Gates of Solaris. Two parks who had split from Turris Lunae. Traitor's Gate became a shire in 2013. Since then, the park has returned to the original location of Turris Lunae and is growing rapidly. It was raised to Barony for approximately 1 year and was again reduced to Shire at the coronation of King Armand of the Celestial Kingdom in May 2017. It was raised back to Barony one reign later shortly after the Coronation of King Watcher (Attila the Un) of the Celestial Kingdom in November 2017. Traitors Gate has since been raised to Duchy in November of 2019 at the coronation of Empress Lirael Maerad McKrotch

The Traitor's Gate can be found playing in the front and center of Olmo's Basin Park in San Antonio Texas. A&S classes start at noon. Battle games begin at 2pm.

If Olmo's Basin Park is flooded, we meet on the corner of McCullough and Basse Rd.