A Shire of the Celestial Kingdom

Tori-Mar is high elven for the 'Torn-lands' formed after the Barad-Duin/HFS fiasco. The first Reign is recorded to have occurred in March of 1991. It's heraldry is a Sable tower on a Sable field, making it somewhat difficult to make park banners.

Mainly a stick jock park. Home of many of the traveling members of the Celestial Kingdom such as Arthon, Clalibus, Drakknar, Rand, Asylus, Diego, Dalos, Aiolos, and Argus. Tori-Mar Has suffered a loss of attendance recently due to it's members; holding office, Baking Cookies, getting cranky, or just being reeeally old.

What started the explosion that was Tori Mar

Back when the world of Amtgard was a whole lot freaking smaller than it is now, there was a single Kingdom - The Burning Lands. Now, Sir Nevron left his home in El Paso and started a group that became the Emerald Hills in Dallas. Around the same time, Sir Nithanalorn left El Paso to come to the artist-friendly and liberal city of Austin. He started Barad-Duin, Tolkien elfish for City by the River, and formed the Grand Duchy, same thing as a Kingdom -just sounds cooler.

Now somewhere along the line, the member's of Barad-Duin got tired of Burning Lands ruling from far away in El Paso* and started to want to do their own thing. So they formed the High Fantasy Society. I think I missed this whole formation by a few years, never was quite sure. Either way, it was still going strong when I showed up.

A guy named Theo Blackflame, meanwhile, had moved to Kerrville, Texas a little later. He started Bifost and later Turris Lunae started up in San Antonio. He got them to form the Celestial Kingdom, which is still obviously around today.

Somehow, Rufus found out about it and started talking to them. This is before the days of email, so we are talking a lot of phone time. He was invited to go up to the Emerald Hills and participate in a war the CK was having with them. He invited some of us to go, I figured it would be cool. So we all piled into Rufus's battered old brown Ford and went up to Dallas.

If I was impressed by Barad Duin, my first war was simply amazing to me. I saw people everywhere!

We had a blast, and Rufus saw a lot of people that he hadn't seen in a while. -Wanderer

He was being courted to start up an Amtgard group. He got with his sister, Debby and her husband, Chuck, he played Tomadachi Koronada, and along with Syko and Booga: we started to make plans to meet.

We decided to meet at Pease Park on Sunday, since Barad Duin met there on Saturday, started playing on the other end of the park. There were twelve of us at the time but that quickly grew.

We never set out to bring Barad Duin down, I think we mostly just wanted more to do and go see. More people to play with. 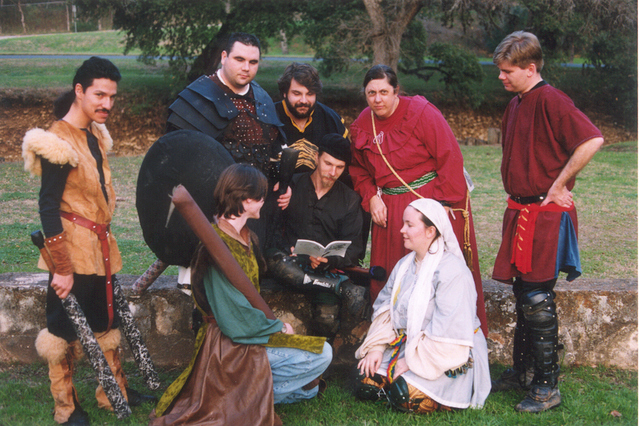 Below is a alphabetical list, compiled by Sir Clalibus of all the denizens, past and present of Tori Mar.