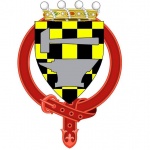 I have such a good BP. So acidicly positive ^.^ - Jaeden
"Glitter is the Herpes of the A&S world" - Kevin Tjia NERO Chapter Owner
"White bag weapons"

Apparently, Thorpe has played for a long ass time. He originally began Amtgard when it wasn't a recreational game, but a mandatory requirement of all men when they came of age. Like his father before him, Thorpe wielded the foamsword out of necessity to protect his home and clan from the dinosaurs. In the Year of Nine Watchers, Two-Thousand and Ten, Thorpe was blessed by Tempus after driving his polearm into an enemy combatant with such ferocity that it tore through him and impaled the poor bloke into a tree (it was terrible.. There was blood EVERYWHERE). This battle saw the beginning of a quest that would consume Thorpe for years to come; the blood of his slain enemies would not wash free of his linen tunic, and so Thorpe and his trusty steed Kavik set out in search of the Bleach of Purest White.

Titles: Baron and Villain of Olympus - Given by Squire Jagermeister of the Raiders