Thea of the Marshes

Lady Squire Thea of the Marshes, of Madoc's Keep, Kingdom of the Rising Winds

"Ok, fine, you're both good at fighting and a delicate flower." - Sicarius

"She just keeps pointing at me and glaring." 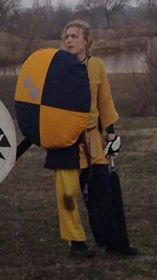 Thea saw Amtgarders in a park one day in 1999 and was told she was too young to play. So she went home and made her own weapons out of pool noodles, pvc, and duct tape. Then she would beat up her older brother with the dangerous old tech monstrosities. After a couple years of that she found Lochlan (later Hawk's Point) and began to hit even more people with old tech monstrosities. She eventually convinced Barthalamule to start a park with her, the Carrion Marshes.

Thea has played in Neverwinter, Winter's Edge, and the Rising Winds.