"I can easily look back on my life and say that Amtgard has helped me define who I am." Sir Teth

When he returned to the states, he was stationed in Ft Hood, Texas. He was quickly welcomed back to Amtgard at Dragon's Haven by Logan and Athisdaine, who had arrived mere months ahead of him. Fighting in Texas allowed Teth to see the bigger picture of Amtgard and he became Athisdaine's Squire when Athisdaine was knighted. It was with a heavy heart that Teth left Texas, but he longed to return to his home in Kentucky.

Once in Kentucky, Teth was unable to find anyone involved in Amtgard, so he tried on numerous occasions to start his own group, each time he failed... he felt he was missing the comradery that he had with his past friends. But fate would soon catch up to Teth as he browsed the web, one day he saw something new, the Amtgard Atlas. With this he found a group named the Five Oaks located a mere 45 minutes from his home in Louisville. On the day he arrived at their park, he knew he had returned home once again to a game he loved. It was among the populace of the Five Oaks that Teth met some of his best Friends.

It has been years since Teth joined the Five Oaks and the Kingdom of the Rising Winds, and it has been a grand adventure. From Starting a Civil War in the RW (roleplay) to eventually becoming a Knight of the Serpent, Teth has enjoyed a long Career in the Game, and he looks forward to teaching others and helping them enjoy Amtgard as much as he does.

Before Teth was welcomed into the peerage he was Squire to Sir Athisdaine Montoya XVII.

In June, 2008 Sir Teth took Artemis as his Squire. 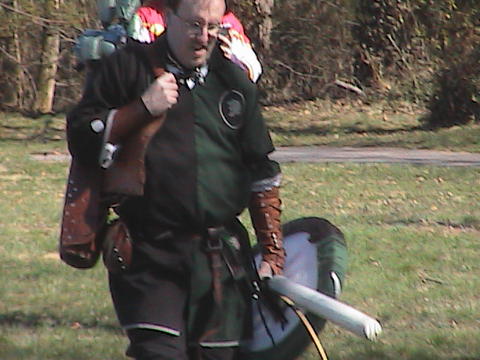 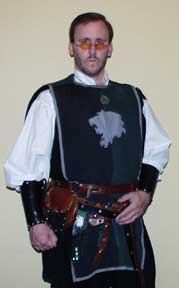