”Verily I sayeth: he who cures leather taneth.”-Corbin 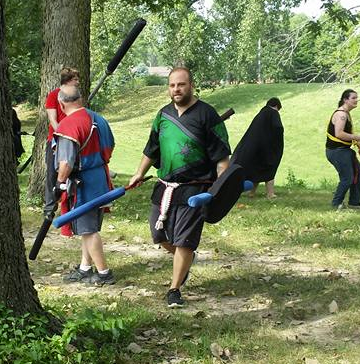 Tanath originally started the game around 1994. He discovered Amtgard in a Coppell newspaper, and joined a park in that area. After two trips to the field, the group seemed to have disbanded.

About 4 years later, while looking for a Dungeons and Dragons group at a game store in St. Louis, Tanath found a flier for "Amtgard, Shire of Western Gate".

Tanath has been quoted in this article about Amtgard in his local newspaper.

Before Tanath was welcomed into the peerage he was squire to Sir Johann Von Grimmelshausen.