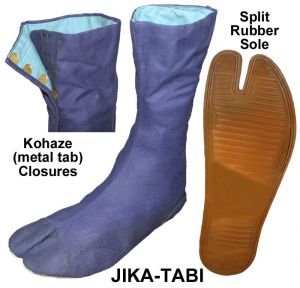 Tabi (足袋?) are traditional Japanese socks. Ankle high and with a separation between the big toe and other toes, they are worn by both men and women with zori, geta, and other traditional thonged footwear. Tabi are also essential with traditional clothing—kimono and other wafuku. The most common colour is white, and white tabi are worn in formal situations such as at tea ceremonies. Men sometimes wear blue or black tabi for travelling. Patterned and coloured tabi are also available and are worn most often by women, though they are gaining popularity among men as well.

Construction workers, farmers and gardeners, rickshaw-pullers, and other workmen often wear a type of tabi called jika-tabi (地下足袋 tabi that contact the ground?). Being made of heavier, tougher material and often having rubber soles, jika-tabi resemble boots and function as outer footwear rather than as socks. Like other tabi, jika-tabi are toe-divided so they can be worn with slip-on thonged footwear. Shojiro Ishibashi, the founder of major tire company Bridgestone Corporation, is credited with their innovation.

Though slowly being replaced by steel-toed rigid-sole construction shoes in some industries, many workers prefer them for the softness of their soles. This gives wearers tactile contact with the ground and also lets them use their feet more agilely than rigid-soled shoes allow: for instance, people who traverse girders on construction sites like to know what is under their feet, and craft practitioners such as carpenters and gardeners additionally use their feet as if they were an extra pair of hands, for example to hold objects in place. In contrast to socks that, when pulled on, fit the foot snugly because of their elastic weave, tabi are sewn together from cloth cut to form. They are open at the back so they can be slipped on and have a row of fasteners along the opening so they can be closed.