a Barony of Desert Winds, located in Billings, Montana. 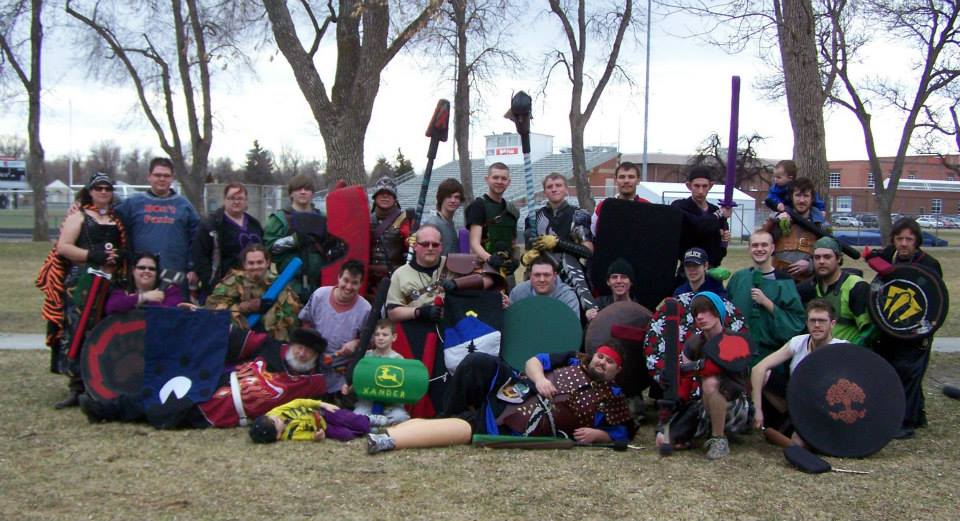 Founded in August of 2008, by Loup, Jurgen, Kyra Kadais, Talaisan, Tanis and Vladimir.

Unwittingly became a Demo at Saturday Live, a YMCA event in early September. Signed waivers doubled. So did regular attendance. A lesson to be shared: when life hands you a thousand kids, stake out the chunk of field behind the drama geek's tent.

November 15, 2008 - Assaulted a stockade of goblins. After a furious battle, the goblins all lay slain, save one who escaped to tell their Dark Lord of the attack...

November 22, 2008 - Mid-reign, the Dark lord (Phil) is beaten (by a dragon or was that immortal villagers *we did have the skull after all*). A weapons tourney is started (to finished at the park next week along with the A & S competition). The first court was held, and several awards were given out: 4 -1st order of the warriors, 1 -1st order of the rose, 1 -1st order of the jovious. Along with our first real big feast.

January 10, 2009 - After a long break due to weather, vacations, babies and assorted other distractions, 8 manage to get back together. Ditching in the snow, and a discussion of sponsorship descends to the real question : IM or DW?

March 7, 2009 - Coronation. Visitors from both DW and IM were warmly welcomed and learned from by most of the regulars and some of the occasionals. It is the opinion of the writer that this event was awesome for its scale.

We meet at Pioneer Park every Saturday at Noon on the south central part of the park where the trees are in straight lines.

Pioneer park can be reached most easily by taking the West Billings exit, and following the City Center offshoot (That's Laurel Rd) over the overpass onto Montana Ave, then turning left onto 3rd St west. Follow 3rd St w north, past Billings Senior high School. The park is located directly behind the high school.

NOTICE : If the weather is bad, please call Talaisan before dragging yourself out to the park. We're looking for an alternate place to host, currently. Please also make sure to check : http://games.groups.yahoo.com/group/BillingsAmtgard/ for any other information