Began her journey in May of 2017, Qadupae (pronounced Kah-doo-pay) was introduced to Ethereal Tides via Red Fox and quickly fell into her newest obsession. Already a fan of cosplaying, it was an easy leap into Amtgard. She showed up first day garbed and hasn't missed a day garbing since.

Qadupae is a wanderer of the Way, traveler of worlds, and conduit/channeler of energy. A witch and high priestess, she is most often found at sunset and night, even at large scale events. She will oftentimes talk in tongues, but no worries, she rarely says anything ill or cursing as she is a stout believer of the pagan ideal "And ye harm none, do what ye will." Quick to laugh, eager to drink, ready to dance, and fiercely protective of those she allows in her circle.

Qadupae is a descendant of Tiffany and Sarah Aching, a family of witches that made their steading in The Chalk, Lancre, of Discworld. The former was a student of the great Esmerelda "Granny" Weatherwax, and both Aching women were known for their practical skills as both witches and natural homesteaders. Q does her best to carry on these skills as she is honored with their names and hopes to carry their torches for many years to come. Like Weatherwax and the Achings before her, Q walks the line between life and death, good and evil, an Edge Witch that understands few things in life are cut and dry, black and white. Some of her decisions and strategies because of this are questionable.

At some point in her travels, she ended up encountering a strange temple that contained three massive creatures: a Gynosphinx, a Loquasphinx, and an Astrosphinx. If asked, Q can attest to the fact that this was the most stressful and dire of times in her entire life. The only reason she believes she was spared from being killed right away was that the trio had been passing puzzles and riddles back and forth for many eons and had grown bored with each other, so saw her as a new potential to add to their riddles. She didn't desire their respective hoards, so without a fear of her attempt to kill them, they also allowed her to live with the deal of staying for three months and doing more puzzles and riddles with them. A hard fought deal considering the Astrosphinx wanted to just devour her. At the end of three months, she walked out of the temple dazed, confused, and always carrying at least one spare riddle with her.

Because of her extensive time walking through different realms, she isn't quite sure when she ended up in this one, nor does she feel a pull or need to return to her old realm. As the witches of her line normally travel the Way a lot, very few of them ever stay put enough to build a foundation on or a steading. All she knows is that she is in this realm now, possibly permanently, and she makes the most of it.


Heraldry Meaning
Silver/Ardent Background: peace, serenity, moon
Chevron Raguly: Protection and defense that has encountered many difficulties
Blue: Truth, loyalty, strength despite those difficulties
Horns: Will not fight unless provoked, peace and harmony, strength and fortitude
Feline: Once provoked, fierce and dauntless, courageous and hardy

House Sphinx of Alexandria, keeper of the Library and her scrolls.
Crone of the Bitch Witch Stitch Niche
Prime Minister of Ethereal Tides, 2 terms of 2018 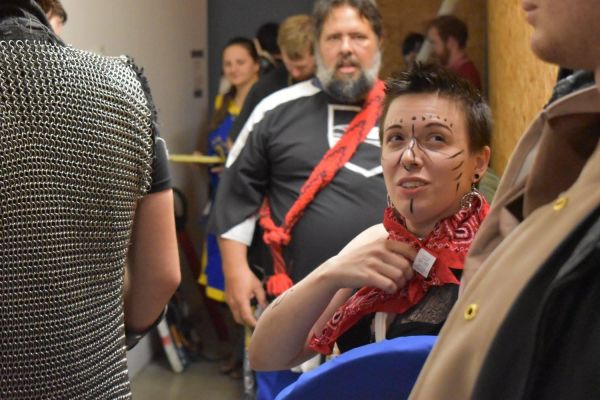 Qadupae at a dungeon in WI