"Nick, you're not a piece of shit." -Madness 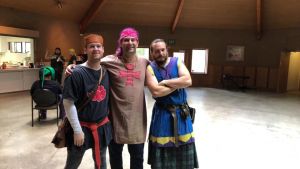 Member of the Barony of Dragon's Forge in Blackspire.

Known heavily for his roleplay and his tavern, the kilted dwarf. ran mostly out of pocket and donations, if he isn't clashing tankards he's clashing shields.

He was immortalized in they eyes of his peers for the day he was challenged by his fellow lord Toraka to a honor duel mid battle game at pacwar 2018.

Formally known by the name Nakadai, Kormac changed his persona name in 2017. He also goes by Floi during Shattered kingdoms and when running his Tavern at Blackspire events.

Baron of Dragon's Forge (current, 2019) Feb 21, 2009: Nakadai elected Guildmaster of Assassins for the Kingdom of Blackspire.

Awarded title of Lord by queen Dame Aurora, midreign of 2019