Grand Duke Sir Michael Hammer of God, of the Kingdom of Polaris 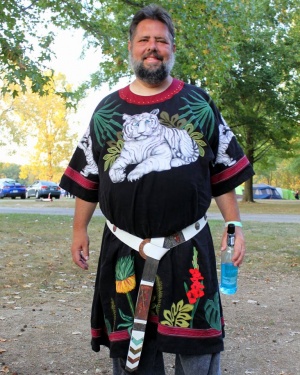 "If you say his name three times, Mhog will appear and will make amtgard things happen. This may take you spinning 3 times clockwise while saying his name. Also, a noob may need to be sacrificed at some point, the ancient amtgard texts are not clear”

Originally from Boulder, Colorado, Michael attended college in the late 80s in San Antonio, TX, and while there he was a founding member of the first Amtgard chapter in San Antonio, Turris Lunae. From there he co-founded the Celestial Kingdom, and served as its First King, it's 11th Prime Minister and it's second and 9th Champion. While in the CK he became a Knight of the Crown, Knight of the Sword and Knight of the Flame. In 1998 he moved back to Colorado, where he earned his Warlord in the Iron Mountains, served as the 19th, 24th, Regent 29th Monarch 18th Champion as well, and became a Knight of the Serpent in June of 2003. He resided in the Duchy of the Frostlands for several years before moving to the Barony of Mists of the Dawn where he plays today.

One of only a handful of 4-belted knights in Amtgard.

Original member of FWACK and instructor at all of the SKBC's so far. He has been Instructor Liaison for FWACK since 2005.

In 2019 he was voted into the Amtgard Hall of Fame.

Michael's Belt line should really be called a tree, it sprouts in all directions.

Tree as of Micah's knighting