(Redirected from MDeth of Benden Weyr)

Sir M'deth of Benden Weyr, of the Lands that Burn

”Someone with the attitude of "win at all cost" will never be a great fighter regardless of wins and losses.” 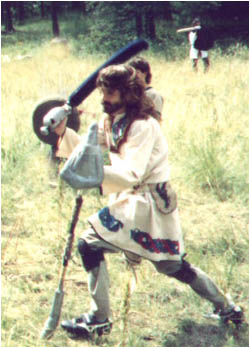 One of the greatest warriors in Amtgard History, especially in the 1980s, where a case could be made for him being the best fighter during that decade.... very quick, agile, precise.

He is also Aramithris's younger brother. Married to Caliope. Day to Die was written about him.

Member of the Saracens for the longest time before emerging as a Corsair at the Gathering of the Clans in 2014.

He was the second Knight in the order of sword preceded only by Morluk in Amtgard history, given on 5/4/85 and is the second of the 4-belted knights as well. Served as King of the Burning Lands in the early days.