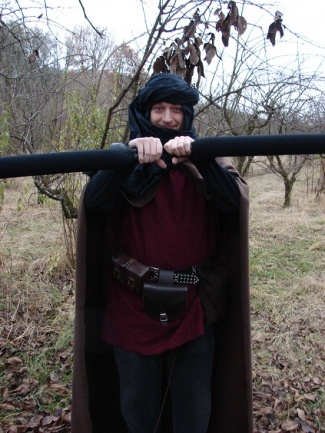 Ivan Žalac, as is his real name, started playing Amtgard in 2001., in the now-defunct group of Nepokoreno Kraljevstvo. As is traditional in Croatian Amtgard, he changes his persona, Amtgard name, roleplay, and garb every time he dies on a major quest game. He's currently active in the Shire of Krvomedje where he maintains ORK records, as well as in several non-Amtgard groups in Croatia. He's promoting roleplay and Croatian way of LARP using Amtgard rules. He's active on E-Sam as izalac.

First he played as Žaoka Presvetli, a barbarian who got enlightened after drinking a certain potion - which got him distant from the Gavran (Raven) barbarian clan soon enough, however - he got his own clan, Vučji Čopor (Wolf Pack) gathered around him, but it didn't last long and soon broke up. Žaoka met his untimely end in 2003 when he sacrificed himself to save his clan from the rage of Gavran clan. Žaoka's personality was usually friendly and trusting.

Maksimilijan Vurnovečki was his second personality. He was neutral, diplomatic and cautious for several years, and played as a warrior and healer, and acting as a pagan Slavic priest. With his rise in power, Maksimilijan played more and more an active role of the protector and got himself involved in in-game politics, though still cautious, and developed a massive network of informants due to his belief that end justifies the means. He never broke his word, which got him in some serious trouble. After a shift in power, it held him fighting for a lost cause until the very end of it, and Maksimilijan got executed by his opponents in 2011. Maksimilijan was in-character married to Apolonija, his real-life wife.

Luc du Pointeaux is his current personality (2011 and ongoing). A prodigal youngest son of a French nobleman, early Renaissance background, Luc loved nothing more than to squander his father's money on drink and women. He traveled to these lands seeking adventure (and women), and got himself married (in-character) to the elf sorceress Alestra. He was wearing a hat in the musketeer style, but switched to wearing a Berber style turban after the in-game honeymoon in Egypt. His personality is outgoing, and flirty towards women, although only in-character. Character is played as a Catholic, in contrast to previous pagan characters. Currently leveling Assassin. Speaks with a heavy French accent, mixing it with some actual French which he started learning just to be able to play the character better. 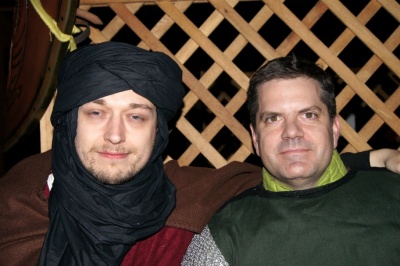 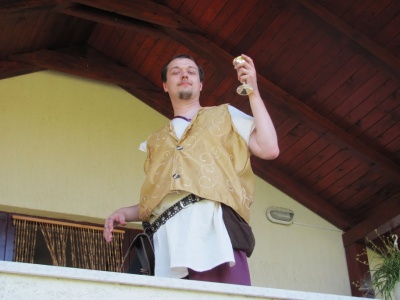