"That is how my staff skills get you... Sometimes I am slow like the sloth, next I strike like a snake.... VAACHAA!!" 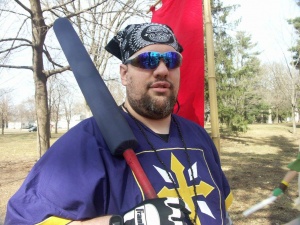 Grail is a Crazy guy and loves to shoot people.

Grail, (Graileon Onofrio Dandolo) heralds from the Dandolo Family, a Noble Family from Serenissima Repubblica di Venezia (The Serene Republic of Venice) responsible for 4 Doges of the Republic and their great contributions to the Artistic Community. On his 16th Birthday he set out on a pilgrimage to better himself as a man and an artist. Shortly after he began to find himself pursuing the Bardic Arts. In the time since he has traveled the known world perfecting his craft while seeking to better himself before presenting himself to his family back home. During his passage through some unknown lands he found himself confronted with a large hill troll which chased him through the woods. Turning to look behind him he ran directly into a tree and knocked himself unconscious. When he came to he was confronted by a Barbarian Argus Runeaxe who told him of how he had saved his life. Argus had ripped a small tree from the ground and beat the Hill Giant therefore saving him. Grail stayed in the Lands of Darkshores then perfecting his Bardic Arts while learning combat with the Barbarian Argus and vowing not to leave until his Life Debt was fully repaid. During this time the Black Legion of Caesar's Prefect recruited him into the Black Legion to "do his duty for his Country". After the Black Legion fell he wandered around lost in the world until being taken in by a secluded group of warrior monks. While at the Monastery He trained as a monk and learned healing arts. Shortly after regaining a shred of hope training with his new family, a dark force raided the Monastery and killed all the monks. Vowing vengeance Grail went back into the world to destroy all that is evil.