"As Per Corpora and In Accordance With Prophecy..." 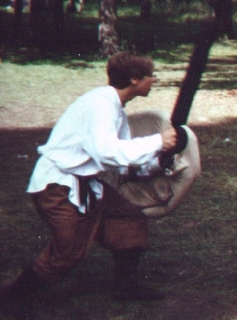 Liam started in Silverwater in 1995 or 1996, having fun with bardics and feast-rules. He took several breaks from the game, and about a year after Crest Haven was formed, Liam returned to Amtgard "for realz." He served a term as Regent of Crest Haven, and two as Kingdom Prime Minister, during the latter of which he helped facilitate the re-working of the Neverwinter corpora.

Performed Regulate at Neverwinter winter coronation in 2008. Wrote the foreword for Edition 3.0 of the Neverwinter Corpora