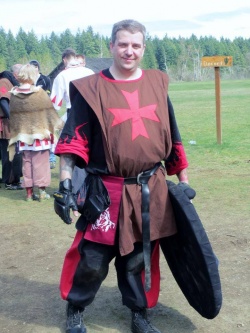 Laurel joined Amtgard in 2013 after meeting several players whom he became friends with at another venue. Deciding to give the game a try he started playing locally at Dragons Forge. Soon there after he started traveling to other holdings within Blackspire and to the neighboring kingdom of Northern Lights. During his travels he found his home away from home at Inland Ocean. Meeting lots of people and enjoying the game He decided it was time to start looking for a fighting company. As several of his friends were in the Templars, he decided it was a natural fit and actively pursued joining their ranks. At Northern Lights Coronation Campout 2014 he became an initiate of the Templars.

Accepted a Man-at-Arms belt from Squire Odin on August 3rd, 2014

At Pacwar 2016 Laurel was elevated to full brother of the Templars.