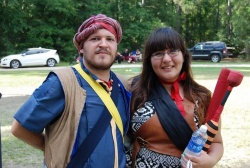 Started Amtgard with Wickerwood in 2014 but moved to San Marcos to attend TSU for music education, transferring her credits to Traitor's Gate.

In April 2015, she founded the shire of Zen Zen, in San Marcos, Texas, and was it's Pro-Tem Sheriff. Since then, Zen Zen has withered and she has taken up residence there again as the Barony's Regent.