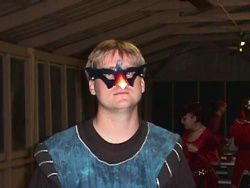 Founder of Darkwater East, Kitirat O'turea (aka Ken Shannon) was one of the principal people involved in the formation of the Neverwinter Kingdom.

He is no longer active in Amtgard, but is now a published fantasy gaming author, currenty with Mystic Eye Games.

Some of his works include

Member of The Evil French

He was squired to Roger Shrubstaff, and was made a Knight of the Flame flame by Tonbo in July of 2000. He has the distinction of being the first knight made by the Kingdom of Neverwinter. Kitrat has at least one Squire, Velfan.

Kitirat was a longtime member of the 6.1 Rules committee, and was the principal author behind most of the changes to the magic section (including the formatting change of the spells to a D&D 3.x style layout) and the monster sections of what is now the 7.0 rulebook.