The Empire of the Iron Mountains 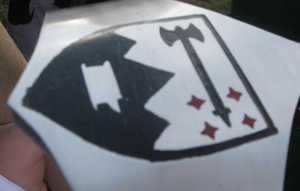 2010 Iron Mountains Coronet, made by Medryn

The sixth Amtgard kingdom, based in and around Denver, Colorado.

The Iron Mountains was originally founded by Sir Rift Gorhan Tele. The group was recognized as a Barony on April 24th, 1989, and granted Kingdom status in July of 1992. The first Kingdom-level Monarch was Sir Moss du Percheron.

The Empire of the Iron Mountains converted from a Static Crown to a Floating Crown Kingdom in the year 2000.


By around 2007 the Iron mountains may have been the largest kingdom in Amtgard, stretching from Utah to Chicago. At the time it had two Principalities, Desert Winds and the Rosetta Pact. In late 2007 The Rosetta Pact was dissolved and the chapters remained under the empire. In early 2008 the remains of the Rosetta pact organized into Rivermoor and Steel Valley, which became Olympus, then Polaris. At Clan that year Desert Winds became a Kingdom and left the Empire. In 2009 the Denver Chapter became known as the Crownlands from that point until 2014. During this time it was not treated as a land in its own rite without the capacity to give awards or elect the local monarch so as to not drain the kingdom leadership pool which was coming from the chapter. Around the time of Clan XXIX it was decided that Polaris should seek sponsorship with the Rising Winds, and as a result the following year it left the Empire. At Gathering of the Clans XXXIV Rivermoor became a Kingdom, leaving the Empire without a sponsored Principality for the first time a decade.

As of 2021, the Empire had been reduced to a mere three chapters.