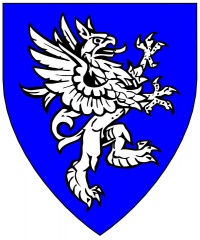 At this time Lord Protector Nicodemus d'Aravoth and Lady Zhanell are the heads of this household.

Gryphon's Claw was once an arts-and-crafts and service-oriented battle company in the Emerald Hills formed in 2001. Its glory days mirrored the rise and fall of Broken Shield the park that nearly every member of the company attended. During it's height Gryphon's Claw had 12 active members, before losing most of them to other companies, attrition, and several moves out of the DFW area.

It disbanded in 2004 and re-formed as a Household to allow Zhanell, Nicodemus, and Firestalker to petition the Justicars.

To see information about other groups in Amtgard please see the Household Page.