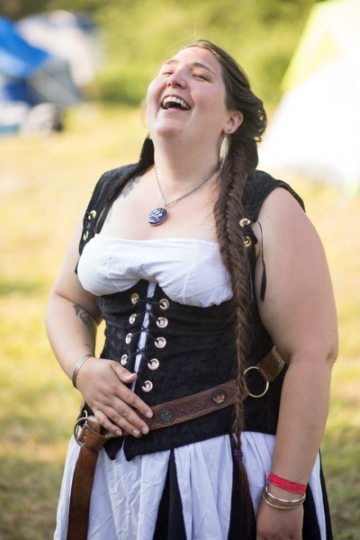 Glyn, at BotD 2014 laughing at Bear. Who also took this picture.

Fielding first in 2003 at Wolvenfang for a single day, followed by once in Haranshire, and by attending a sporadic handful of events, Glyn began regularly playing Amtgard by helping to found Caradoc Hold in 2004. She spent almost ten years there, moved to California and hung out with the cool kids in Wyvern's Spur for a while, then followed Kenshin to Arkansas and joined up with the Knoblands, then went onward to Missouri and Knight's Rest.

Glyn likes to roam, wandering all over the place. She makes lots of things, sews lots of tunics, and is known for hiding in really obvious places, where half the time no one can find her anyway.

Glyn and Promethea are making a tarot deck out of Amtgarders from Goldenvale and the Nine Blades because they like crazy projects. The Facebook page for the deck can now be found here!