A Defunct Barony under Crystal Groves, located in Hampton, Virginia. 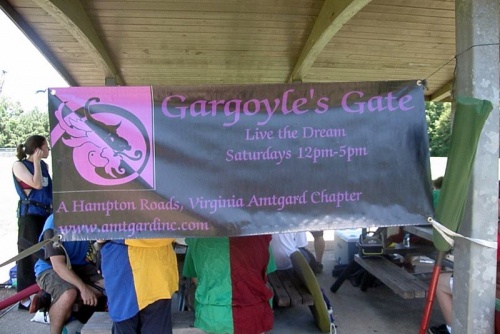 "The past does not matter to the judges, just a new start. All are welcome, so enjoy the journey."

We have a good mix of Class, Ditching, and militia games, which are accompanied by excellent Color-class players and artisans always willing to share their craft with someone interested. On an average day we warm up with ditching, then quickly move to the main event of the day, whether it be a quest, big class game, militia game, company battles or our favorite Boat Battles. After the main event we play games like No Quarter!'s Kick the Can or Three Man Forever.

Come out and visit us! You are sure to have a good time!

Gargoyle's Gate meets at Briarfield Park in Hampton, VA on Saturdays from 12pm to dusk. The chapter had been defunct for almost 10 years when it was revived by (to name a few) Lord Redav, Antonius, Lady Ogoolo, Lord Ray, Gidget, and Ezekiel. They played at Hampton and in spring 2013 they moved to Yorktown.

In the fall of 2013 Gargoyles Gate was temporarily deactivated. It was taken over and again restarted in winter 2013 and moved back to Hampton, VA.