A defunct shire of the Emerald Hills, located in Tulsa, Oklahoma. 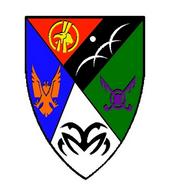 Heraldry for the chapter of five banners, designed by ?????

Maccalus, Jayden, and Bladeshadow started holding fighter practices in October 2007 and formally signed a contract with Amtgard, Inc. as "the Freehold of Five Banners" the following month. The Freehold was established partly as a personal memorial to Maccalus' old friend from the Golden Plains, Dustin Darkenmane, who passed away in 1995. Five Banners hosted its first major event, the Bungle In the Jungle, in Stroud, OK, during the May 30, 2008 to June 1, 2008 weekend.

Five Banners Was accepted as a petitioning chapter of the Emerald Hills in December 2008. In August 2009 the chapter moved to Haikey Creek Park. On October 10th, 2009, Five Banners officially became part of Emerald Hills, signing their contract at Banner Wars X.

Around mid 2012 Five Banners has officially dissolved and merged with Red Storm chapter in Tulsa, OK.

Chiefs of the Freehold

Shamans of the Freehold

War Chiefs of the Freehold

Speakers of the Freehold

Oddities when it was a Freehold

(We have since become part of Emerald Hills, but like to keep this record of our Founding Journey into Amtgard)

There were several unique aspects of our Freehold:

Met at Haikey Creek Park, located at the intersection of 121st st south and south garnett road. Park times were 1pm on sundays and 6pm on tuesdays. We gathered beneath the big group of trees just to the right of the road-- go all the way past the basketball courts and turn into the big parking lot at the back of the park. If you don't see us just before you turn into that lot, check the Labyrinth or the woods behind the playground-- we'll be around somewhere nearby. We kept the calendar at our Yahoo! group reasonably up-to-date, so please check there for specific event information.