Grand Duchess Dame Fionna, Our Lady of Goldenvale. Currently residing in Querna Tema under the Kingdom of Rivermoor

”I AM A DEITY AMONG THE UNWASHED MASSES.” 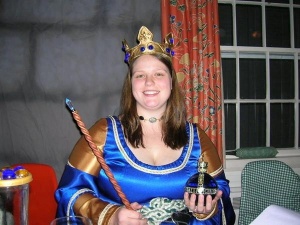 Having started playing Amtgard at the age of 12, Fionna began participating in Amtgard as a Color, adding flavor to the already flavor-full goings on of Goldenvale at the time. Over time, the rest of her family joined her in participating in Amtgard, with her father (Sir Telchar) building weapons and her mother (Dame Cordelia) garbing a large portion of Goldenvale at the time. However, Telchar's employer relocated him to the Central New York area when Fionna was 14.

Fionna and her family kept Amtgard as a large part of their life, becoming the founders of the Shire of Haranshire in 1998. Through use of the internet, and no small amount of traveling, Fionna (and her mother and father) were able to keep in close contact with Goldenvale and make the Shire of Haranshire a fun place to be. Haranshire is still in existence today, hosting an event, Moonshine, each year.

In 2002, Fionna relocated herself back to Goldenvale, where she later married Syr Sanchez. The pair have a son together, Owen, who is quite happily growing up with Amtgard around him.

In 2013, Fionna moved to the midwest and currently resides there.