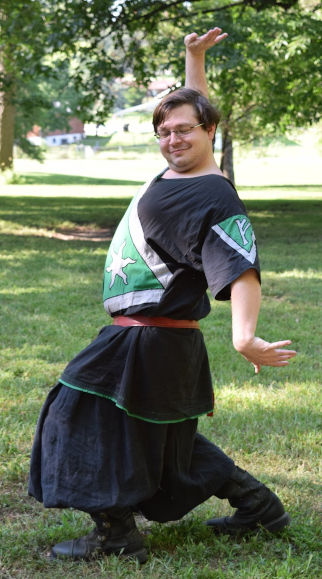 In 2007 began to play as a member of Western gate. Shortly after leaving to fulfill academic goals.

In 2014 FinnTroll was reintroduced to the game by Fuzz and brought to the park of Jupiter Stone's (Now Defunct). FinnTroll took an interest in leadership roles and game very early. He became the champion of the park in February of 2015 serving until August of 2015 when he stepped up as Monarch. After his first reign as Monarch of the Park FinnTroll Received his Baron title from King Konrad for his outstanding service to the park in the creation of battle games and leading raids during the Season 2, 2015 Tal Dagore reign. FinnTroll continued as Monarch for a second term for the park before taking a break. In the Fall of 2016, FinnTroll ran and won as Kingdom Champion serving with Sir Fuzz for a Game of Thrones filled reign. At the conclusion of this reign, FinnTroll was given his Defender title by King Keonee for going above and beyond in his position.

FinnTroll again ran and won as Champion during the Alice and Wonderland reign of Panikk and Hanoske in December of 2018. During this time FinnTroll was center to wanting to change the cultural norm of what were Tal Dagore events. In the mid-reign event, a style was chosen that let players explore a more open world style of event. Taking what he had learned from this FinnTroll then created a similar but larger scale style event at the castle site at Hanson Hills. These events would inspire what came next.

At the conclusion of The Alice and Wonderland Reign, FinnTroll ran again as Kingdom Champion this time with his colleague Sir Beldin. Together the two of them introduced currency back into the kingdom by having coins minted and distributed. FinnTroll designed a system called the LW system that acted much like a strategy tabletop game. The lord's war ran the full length of the term and included an economic store run at each park, a system for looting other players, loyalty and army joining, and of course assassinations and spycraft. FinnTroll as well created a series of tasks for Noncombat players to participate in the wars as well. The reign concluded with the first full immersion event, the Lords War. The effort made created an 80+ man event in a foot of Snow in the middle of Winter. For the task of creating the event, FinnTroll was award Smiths for his service.

At the conclusion of the Lord's War Reign, FinnTroll continued on in office and ran as Monarch. He was elect in January of 2019. FinnTroll ran the ladies war-themed reign. FinnTroll used the LW 2.0 System for this reign selecting different leaders. The reign was themed in the Witcher. During this reign, FinnTroll worked to increase communication among the national Circle of Monarchs. As well he pushed for adding 4 new parks to the Kingdom of Tal Dagore. The creation of a roleplay based board was made and heavily participated as well. The reign concluded with the Ladies war, the second "Full Immersion War" event that was run by FinnTroll.

When Finn Troll began again in 2014 several people have called him various names because of homegangs or other reasons. You may also know Finntroll by the following names: