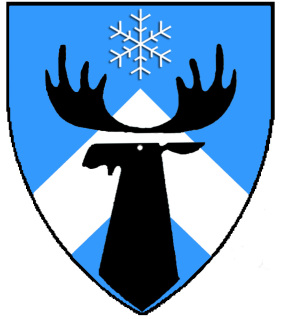 Felfrost's heraldry, as designed by Helios.

A Duchy of the Kingdom of the Nine Blades located in Ottawa, Canada.

Formed in October 2007 by Ausric Blackwolf, Fei Shou, Drake de Montfort, and Vale. They held their first proper Coronation event on the May 2nd-4th weekend in 2008.

While previous chapters had existed in Ottawa (such as Thunder River!, and Shattered Hills), they had since folded, creating the need for a new group. For a while, Soulwind, Felfrost's second and third Sheriff was the only active example of a player from Thunder River! who played in Felfrost, though was not the last, when Ethryn rejoined the game.

Holds regularly scheduled field days at Hog's Back Park (Hog's Back Rd, Ottawa, ON K1A 0M2 - near Carleton University) Sundays at 1pm. For more information, you may visit the following sites: