A Baron of the Kingdom of Tal Dagore, located in Kirksville, Missouri 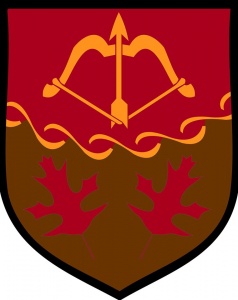 The Barony of Everautumn Valley was formed by Lleyithan and Drizzt of Jupiter's Stones. Everautumn petitioned the Kingdom of Tal Dagore in 2014, and was accepted by a Tal Dagore Circle of Monarchs majority vote at Gafiltafish's coronation in winter of 2014. They were host to the first Cleansing of the Valley on October 12 2014, in which adventurers from across Tal Dagore gathered to defend Everautumn Valley from the restless damned.

In spring, summer, and fall, sessions are held on Sunday at 1:00 p.m., on the Quadrangle of the Truman State University campus. Midweek sessions are normally held at the same location on Thursdays at 6:00 p.m. In winter, park and fighter practices are at the same time but in one of the gymnasiums on the Truman State University campus (usually Kirk Gym). See the Facebook group linked below for current updates on locations.

For more information, join the Facebook Group. Any questions can be directed to Truman State LARP Club.