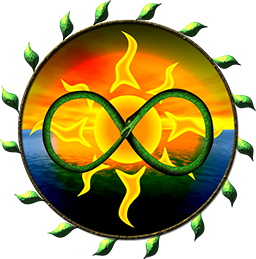 Blazon: On a roundel party per fess tenne and azure, fimbriated marron, in leaves vert, on a roundel or in flames or, a lemniscate ouroboros vert.

The original Santa Barbara chapter of Amtgard was the Shire of Feanga, which was founded by Celedraug in September 2001, who had been recently introduced to Amtgard by the Seven Sleeping Dragons of San Luis Obispo. Feanga originally met at the Santa Barbara Mission greens before moving to Oak Park.

By the summer of 2002, political issues had split the group into two: Feanga remained at Oak Park in Santa Barbara, while evil Randy, Nelle Silver Sun, Melinda Silver Sun, and Taly founded the Shire of the Silver Sun at an unnamed park in Goleta, just north of Santa Barbara. Silver Sun went on to become the seat of the Crystalline Confederacy for some time, while Feanga willfully remained a freehold. While Silver Sun was initially the larger group, Feanga grew to a respectable size within half a year after the split, and after two years Silver Sun's membership had dwindled below that of Feanga.

In October 2004, the two groups finally settled their differences and merged together under a new name: the Shire of the Eternal Coast. Tauron Xian was the first Sheriff of that shire, but its founding was a collective effort by all involved in both Feanga and Silver Sun. The new group aimed to combine the different strengths of the previous two groups' wildly different approaches to Amtgard.

Over the years, Eternal Coast considered joining under several larger groups, including taking Silver Sun's place in the Crystalline Confederacy, joining under Ardent Sands of Arizona (who had dreams of forming a southwestern kingdom), or joining under Wavehaven along with the Seven Sleeping Dragons. Under the reign of Tauron there were even dreams of joining the Crystalline Confederacy and convincing them to join Dragonspine, bringing most of California together at last under Dragonspine rule. But none of those grander ambitions ever came to fruition for one reason or another, and Eternal coast remained an isolated freehold. When the Principality of Westmarch began to form, the dwindling membership of Eternal Coast became excited at the prospect of joining a united Californian Amtgard, but local activity shrank to nearly nothing before anything could become of that idea.

This group was regularly active with respectable attendance until at least the end of 2006, with attendance dwindling throughout 2007. As of summer 2008, activity is reported to be three people meeting biweekly in the park. Visits from other Amtgarders are welcomed and encouraged as Eternal Coast would like to rebuild itself to its former glory. Please see contact information below.

As of summer 2009, the group is again meeting, and has changed their name back to Silver Sun. More current information can be found on the Silver Sun page.

Exit on Turnpike, turn left. Follow Turnpike across Cathedral Oaks straight into the park, and look for people swinging foam.

Exit on Turnpike, turn right. Follow Turnpike across Cathedral Oaks straight into the park, and look for people swinging foam. 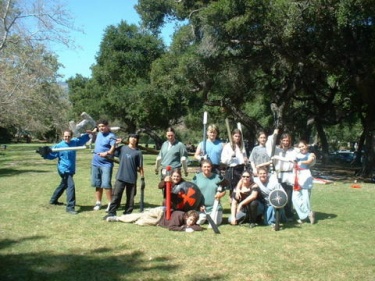 Left to right, top to bottom:

For information on other chapters in Amtgard look here.