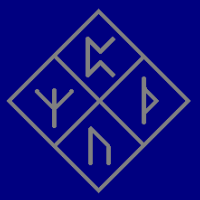 ”You can't fight all day if you don't start in the morning.”

The Einherjar are the heroes who have died with great bravery on the battle fields. In the morning they are woken by the crowing of the cock Gullinkambi ("golden comb"). During the day they train and fight, until they cut each other to pieces. At night they feast at Odin's side and their wounds are miraculously healed. We are here to fight and have fun while not letting the drama giants get us down. We lead others for when we are needed and when we are we are there with a smile and a helping hand to all. Loyalty, honor and strength. These are the values we should value and work for.

We have this tradition of throwing tournaments at dawn at events we visit, which has not occurred as frequently in recent years, where you draw a token that tells you what weapon you will be using for each fight. Don't sleep in or you'll miss it.

We made our first appearance at Ironman V held in Olympus in 2011. We started with members from parks throughout the Midwest, and have grown to include members in both the Kingdoms of Polaris and Rivermoor in Nebraska, Minnesota, Nevada, Wisconsin and Canada.

- Fielding 2 teams of 7 at Day of Games(Pirate Edition) which took 1st and 3rd.

- Started Polaris "pickup" team at Keep on the Borderlands 2016 and lead it to 3rd place.

- Received the 1st Flame given out by the Kingdom of Polaris.

- Signed Northmen Alliance Treaty with the Dog Soldiers of CuChulainn at MAME 2017, making official an alliance of several years.

- Raided and crushed Wildgaard at Battle Beyond the Border 1.

- Won Keep 9 as part of team Golden City All-Stars, along with Asura and Norse Star.

- Led the successful defense of the Raid on Ice Haven by ACW.

- Raided (again) and crushed (again) Wildgaard at Battle Beyond the Border 2. This lead to a negotiation and a peace treaty wherein the Kingdom of Polaris was ceded a tract of land of it's very own within Wildgaard's lands, as well as an annual tithe of authentic Candian maple syrup.

- Many members participated as part of Poles to Plowshares at Keep on the Borderlands 10 (2018) and were found at the front of the charge screaming "TALLY-HO!" as part of every engagement.