”Unlike other Dwarves, *I* have a real accent!” 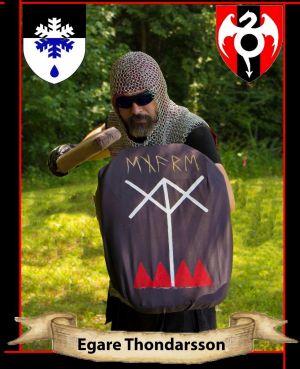 Egare started playing in February 2018, joining Dragon's Hollow just as it became a Duchy. Currently his focus is Arts and Sciences, although he spends as much time on the field as possible.

Egare is a dwarf, originally a scout but now working towards mastering the Rhun. Currently, his focus is earth magic. He's also dabbling with a bow, which he views as a vastly underpowered version of his beloved ballista, Ophiomachus.

He is generally found in the company of Tali Chesh, or in his workshop swearing at inanimate objects.

When life took him South, he helped.found the Freehold of Wolf's Run and serves as it's regent. He also fixed his gaze firmly on life as a scout, preferring to leave the other class stuff to other members of the Box of Eggs.