A defunct freehold, located in Eaton Rapids, Michigan. This park has now merged with others to become Ashen Hills. 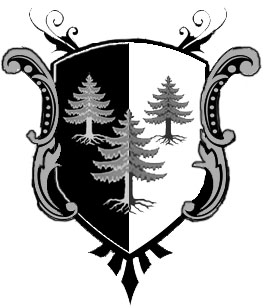 In the northern reaches of the known realms exists the Gauntlet Pennisula, known for its wondrous lakes and roaring rivers. There, just south of the Ashen Hills, you will find an ancient cedar forest of unimaginable beauty. This is the elven nation of Ebonwood, kept protected for ages by the magic of the Druids Of The Ebon Circle. Now, that magic has been broken, and Ebonwood must call out to the heroes of the realm for help, or else be destroyed by the encroaching Red Wolf Barbarians. Will you answer the call?

Ebonwood is a group of Amtgard players, centered in mid-Michigan. We are a friendly and helpful community, always happy to help players both new and old live the fantasy that is Amtgard.

The concept of Ebonwood began in 2004 when Noah Rathbun, Adam Lentz, Lance Adkison, and many others grew tired of rolling D20s and decided to give LARP a try. After searching for months to find a medieval LARP, the guys decided to write their own. For a little less than a year they played Ebonwood, a roleplaying game of their own creation that focused on a continuous storyline, which the players controlled. They fought many an epic battle under these "rules" which were not much more than chicken scratch in a spiral binder. After a while, they grew tired of playing with the same crowd, and sought new members. However, due to their ever changing, trial and error style rules, they found it difficult to gain members, and finally gave up by the beginning of 2006. However, the idea of LARPing stuck with them, nagging for them to return.

In fall of 2008, Adam stumbled across a new game while web surfing; The game of Amtgard. The new rulebook had just come out, and it was fluid, and easy to pick up. Excited, Adam informed the guys, and within a month they had found the nearest park, Ashen Hills in East Lansing, and joined their ranks. Over the next few months, the guys would forge undying friendships with characters such as Io, Artemis, Cinnamon and Elixir, to name a few. They learned much of the Amtgard combat system, and of battlegames. Yet, in their heart of hearts, they longed for that living story they had created with the original Ebonwood. So, after much discussion, careful thought, and woeful tears, Adam, Lance and Noah decided to blaze their own trail, and in July of 2009 founded the Shire of Ebonwood. This new shire would dedicate itself to offering a roleplay rich, story driven experience in which combat, though still abundant, is not the primary focus of the game. Ebonwood Shire worked to raise its numbers, and looked forward to petitioning the Kingdom Of The Rising Winds for membership within the near future.

The three Amtgard Parks in the Lansing MI area (Ebonwood, Frozen Tundra, and Ashen Hills) decided to merge into one larger body. We chose to exist under the Ashen Hills name, as they had already been accepted into the Rising Winds, and the other two parks were still Freeholds. So, Ebonwood isn't necessarily defunct; All of our players are still active, and we still meet at our regular park in Eaton Rapids MI for Fighter Practice, but we now exist as part of Ashen Hills- We unofficially consider Ebonwood and Frozen Tundra as territories of Ashen Hills; We still fly our heraldry, and hold elections for offices and such within Ebonwood Shire, but it's all for roleplay value and for show.

We meet at least once a week, usually on Saturday from 1pm until we get tired, at the Union Street Center in beautiful downtown Eaton Rapids. In the warm months you will find us in the soccer fields. In the cold, we move indoors, usually to the gym.