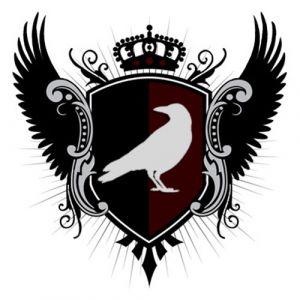 Heraldry for this chapter made by Vonir.

The Ebon Mire was created when the local warriors of Waupun banded together in a time of dire need. The town was threatened by a foul demon that rose up out of the marsh of Horicon. The previously independent fighters joined forces in order to defeat the powerful foe. At first they fought fiercely but separately, but when the battle looked grim, a mysterious ivory raven swooped down from the sky and called for the warriors to band together and use their combined might to conquer the demon. They learned to fight as brothers and slew the swamp terror. The victors formed a band in order to confront future threats, naming the group after their heroic triumph over the marshy menace.