Hell when I'm drunk I'll do all sorts of things I don't remember. I once got drunk and told Draeven he had a good idea once. I need help.-Forest

You put the BAR in Bardic!-Forest

Formerly a member of the Drunken Wyvern, Draeven (despite his skinny size) is able to drink impressively large quantities of alcohol. During one Emerald Hills event Draeven drank a large quantity of Wyvern's Blood (made mostly of Everclear) and then relit a campfire the next morning by peeing on it. Draeven is currently considered 60% alcohol by volume (120 proof). 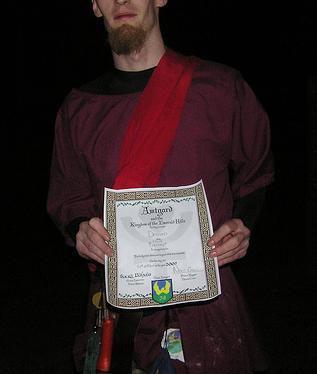