Page Edwin Dobbius Gaalthar of the Hall's of Aegir in Westmarch 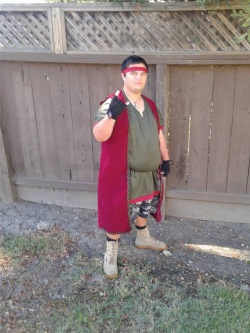 Edwin Gaalthar was at a Stockton ports baseball game when Aegir’s Hall was performing a demonstration of their game Amtgard. Edwin by that time has been larping for 6 years so he went to Aegir’s Hall to try it out he brought a character sheet to Lord Herafor who was prime minister at the time and the group liked his sheet and Edwin felt welcomed and nervous he didn’t know any techniques nor skills until he asked the group. The group was open and helped him out. Then one day a man named Etah came down from Mistyvale and saw that the young Elf with his big Ears and said ‘’Hey Dobby” then the whole group started to mess with him and he became their HouseElf. Using his rage he gotten stronger with his fighting until one day he hit a plateau and kept getting defeated then he realized that the group is just pushing him to do better and that he needed to accept his nickname so he made Dobbius his middle name in honor to his park. Many of his park members noticed his skills flourished after that and he was respected as a fighter. One day he went to Darkshore and met the founder of Aegir’s Hall Grimbold of the Corsairs he took the young Edwin under his wing and became his mentor and taught him the ways of combat. from then on he showed great potential until one night at flurbtastic 7 Lord 52 made Edwin his page and became his lord and mentor. From then on his fighting has gotten a lot better until one day him and his lord were sparring fiercely he was beaten by his lord many times then out from Edwin’s mouth “I want be a sword knight my lord will you help me reach my goal” his lord 52 laughed then got serious and said “Dobby the road is going to be tough but I will get you to your goal” after that he showed heart and ambition. then one day he met two men named Grandmar and Dargon from Mistyvale and they invited him to join their fighting company Ranger Corps. He went to Mistyvale to meet his captain and the rest. Captain Duro made him a Ranger and the young Edwin forgot his goal to become a sword knight but because he forgot his skills grew and he made new family after that he wanted to help the company as much as he can so he wanted to branch out to Aegir’s Hall so he talked to his head ranger Dargon who was helping him become a head ranger so Dargon evaluated him and promoted Edwin to Head Ranger of Aegir’s Hall. After that he wanted to find an apprentice so he met a young boy named Ranger initiate hummus and he became his apprentice and Edwin showed him his ways. Then one day Dargon left the Ranger Corps do to personal matters this made Edwin really sad because Dargon is like a brother to Edwin. After that Edwin wanted to help Captain Duro with the company because Dargon was his right hand man. so Duro made Edwin his right hand man and Edwin recruited many strong hearts into Ranger Corps. Then one day at Feast of Mars 2017 Duro made Edwin lieutenant 2nd in command of Ranger Corps. And Edwin had big shoes to fill and became a great leader and a good fighter. Then something happened Captain Duro dropped out of the Ranger Corps and called Edwin to step up take become Captain and Commander of Ranger Corps Edwin accepted and became Captain Edwin of Ranger Corps then he made 2 kids his apprentice Ranger Blaxclaw and Ranger Donut and now he must show the Ranger way.

Dobby is a page under 52, and is a part of Downfall's belted line.

Promoted to Captain and Commander of Ranger Corps by Duro of the Vale.

Earned his freedom when his lord gave a sock.