"You killed the envoy from the Dragon Council? *sigh* I'm off to make sure they don't kill us all now, thanks."
"Goddamn it, Biggs. No more paperwork."

The Bow for Hire

The Chief Amongst Those on Fire

After a fight between two great evils within Blighstone Hallow a couple cows happened to go missing. Three barbarians had set out to find the cause. What they managed to find was a quite curiously pale woman wandering around the woods, talking to trees. When engaged she introduced herself as Holly Wood and promptly tried to snack on one of the barbarians. When they clearly took it the wrong way she called for her mutated gnoll companion, Baby. Baby managed to amaze the barbarians with his grasp of language from the little book wrapped around his neck while defending Holly from her attackers. The fighting promptly stopped when a cow managed to wander into the area and the barbarians departed with it. Holly cursed at them behind their back for messing up her fitting garb with their blades and dirt, swearing she would tell her master about this.

Strangely enough, Holly was hired by one of those barbarians, Oss'm Ironfist, when he needed to be killed and dragged into his family tomb. Holly signed on for a lark, met her warrior questing companion in this venture. While bickering over Oss'm's dead body and sucking at her bloody cloak she was promptly stabbed for by a group of Blighstone citizens. The questing party left her quite alone when she returned with the exception of Balebanes who eventually remembered he was standing next to a hired mercenary and a vampire. The issue was generally resolved by those of Blightstone Hallow itself and Holly wandered off into the woods.

During a recent harvest season there was a sudden influx of vampires in Blightstone Hallow. A questing party found Holly rambling in the entrance to Red's caves about voices in her head, one yelling in rage and the other just laughing malevolently. Warped to insanity by those voices she had been turning humans and resurrecting wyverns to protect herself and attack any comers. Alarik was one of the few in the group that engaged her with more than aggression reactive to the waves of undead. The group advanced entering the cave housing a red gem and a amazingly preserved large corpse of a black dragon, Red himself nowhere to be found. Listening to Holly's ranting they broke the crystal, releasing a infuriated Red without a soul. He attacked the group, tearing into Holly and departed. They also managed to resurrect the black dragon who left the cavern with one sweep of his wings, laughing. With that, the voices left Holly.

Holly has returned to Blightstone Hallow proper, running around providing her own version of aid which usually complicates things for all involved.

Abbadon appeared in the midst of a evening quest between two waring factions. Regardless of choosing the horde she kept to herself, making even her own side wary of her as she blended with the shadows. She was appeared a month later to a couple citizens of Blightstone Hallow, having been trapped with her party for the Goblin King's amusement prior to the Blightstonians themselves, giving warning that the hobgoblin had lied about needing the be the last one standing to be freed. She managed to escape with the others after defeating the Goblin King himself.

She was last seen traveling with Cerberus.

There once was an apprentice of alchemy. She chose the profession simply because it was not very taxing on her broken body and she may be able to ease her own pain. In growing her ability and craft she signed on with one of the best known master alchemists in the region. Unfortunately, the master was quite mad. After a couple months that felt like years to the straight-laced professional, some adventurers came along and promptly found the master was quite entangled in larger issues in the region. After swearing to a bard named Therin that she had no knowledge of what her master had been doing she aided back to her master's and witnessed him being teleported to a star. Things have been nice for Yewll since, or so she felt.

A year later, after a busy week's worth of activity she now finds herself with her own safely protected lab with living quarters at Caradoc Hold and under the protection and employ of Therin.

Navigator Wren Bannister is not at home currently, land-bound. Having escaped justice for providing the former king Nydgenga Dawnbreaker with means to suppress all non-humans survival does not necessarily mark one for good things. It was for the pay and it was good while it lasted, morals aside.

She was last seen having killed an ogre for admitting to baby-killing for consumption at Caradoc Hold. 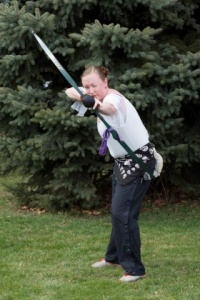 In her crappiest garb! 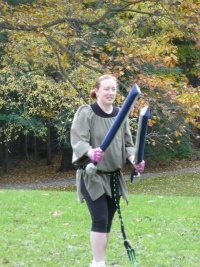 Robin started playing Amtgard in July of 2012 and has not stopped since.