”Leave it better than you found it.”

Also known by some as Ole' Grey Beard.

Darrian was introduced to Amtgard in early 2002 by Sir Syke and Dame Kaia. Darrian quickly became active in the Mithril Hills monarchy by becoming Regent. Later he went on to serve as Champion, Baron/Duke, and then Chancelor (pro tem) of Mithril Hills. His home land has always been and continues to be Mithril Hills.

Darrian has also been active in the artisan circles. He took Best In Show at his first Dragon Master competition and has gone on to take Arts & Sciences Champion in every Crown Quals he has entered. Darrian has also taken the title of Overall Dragon Master twice, first at Winter Bash '09 and again at Pac War XI. Darrian can also be found teaching at or assisting in running Blackspire Ithras, an Arts & Sciences learning event.

Darrian was squired to Sir Jaxom in late 2003 and later picked up Meya and then Falcon as Man-at-Arms.

In the Fall of 2006, Darrian spearheaded the rebirth of the Argent Flame Household, a Household dedicated to bettering Amtgard for everyone through service work and arts and sciences. Originally the Argnt Flame had a Fighting Company associated with it as well, but this was folded in 2009. There was too much Household involvment in service which prevented the Company from participating as well.

On Septmber 21, 2008, during the Kingdom of Blackspire's Weaponmaster Tournament, King Sir Tseng dubbed Darrian Knight of the Crown.

He and his wife Aristiri have three children: Rache Tyricson, age 19, and Andel & Marie Craymore, ages six and five respectively.

In 2021, during the dark plague, Darrian was summoned back to his family lands to take over stewardship and his sister, Grand Duchess Dame Cetalia, arrived to take over for him. 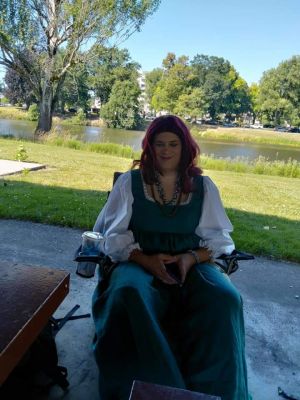