A type of projectile weapon which can be used in Amtgard. Most of the rules that apply to Bows apply to crossbows. Specifically:

The crossbow was first seen on the field of amtgard on July 17th 1983.

Because a crossbow typically has a much shorter draw length than a bow, they can have greater poundage without exceeding the same limits. Amtgard has a limit of 450 inchpounds, which is the poundage multiplied by the distance the string travels (power stroke). Power stroke varies from 6" in pistol crossbows, 9" for many SCA repros, 10" for Oznog's, to just about anything for absurd bow-on-a-stick jobs. No pistol crossbow made exceeds the 450ip limit.

450 inchpounds is significantly less than the draw of a 35# @ 28" bow, and is legal for close-range shots. Despite the reduced power, since crossbow bolts have approximately half the shaft weight of a 28" arrow they can still deliver fairly effective speed and range. The reduction in shaft weight generally makes an inherently safer projectile since there is less kinetic energy in the shaft which is the primary problem in LARP archery. 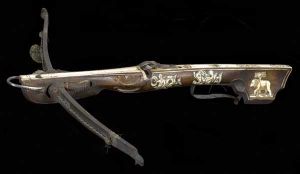 Steel-lathed German crossbow is of a type used between 1450 and 1800 across an area spreading outwards from Nuremburg and Augsburg in Bavaria. There were two sizes of this type of bow and this example is of the smaller kind. Accordingly, it was known as a ‘half-sized bow’ or Halberüstung. However, it still had a large draw weight of 700 pounds (320 kilograms). This was far too much to be drawn by hand it was done using a separate, toothed ratchet-type machine that was attached to the stock.

A crossbow is a bow mounted on a stick (called a tiller or stock) with a mechanism in it which holds the drawn bow string. The earliest designs utilized a slot in the stock, down into which the cocked string was placed. To fire this design, a vertical rod is thrust up through a hole in the bottom of the notch, forcing the string out. This rod is usually attached perpendicular to a rear-facing firing lever called a trigger or 'tickler'. A later design utilized a rolling cylindrical pawl called a 'nut' to retain the cocked string. This nut has a perpendicular center slot for the bolt, and an intersecting axial slot for the string, along with a lower face or slot against which the internal trigger sits. They often also have some form of strengthening internal 'sear' or trigger face, usually of metal. These 'roller nuts' were either free-floating in their close-fitting hole across the stock, tied in with a binding of sinew or other strong cording, or mounted on a metal axle or pins. Removable or integral plates of wood, ivory or metal on the sides of the stock kept the nut in place laterally. Nuts were made of antler, bone, ivory or metal (usually brass). A trigger system, (usually made of iron or steel from medieval times onwards), was used to retain the force of the cocked string in the nut and then release the nut to spin and the string to shoot the bolt. Sophisticated bronze triggers with safety notches are known to have been used on crossbows from ancient China. Complicated iron triggers that could be released with little strength are known in Europe from the early 1400s. As a result crossbows could be kept cocked and ready to shoot for some time with little effort, allowing crossbowmen to aim better. 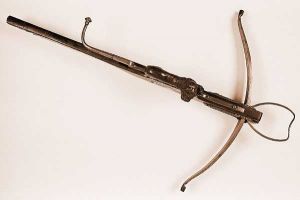 This crossbow has a massive steel bow, revolving nut release and a long slender stock (body). This is a very powerful weapon with a draw weight of over 700 lbs - far to much to be drawn by hand. So sitting on top of the stock is a windlass or moulinet, which draws the bow using a mechanism fixed to the butt with rotary handles.

The bow (called the "prod" or "lath" on a crossbow) of early crossbows were made of a single piece of wood, usually ash or yew. Composite bows are made from layers of different material—often wood, horn and sinew—glued together and bound with animal tendon. These composite bows, made of several layers, are much stronger and more efficient in releasing energy than simple wooden bows. As steel became more widely available in Europe around the 14th century, steel prods came into use. The crossbow prod is very short compared to ordinary bows, resulting in a short draw length. This leads to a higher draw weight in order to store the same amount of energy. Furthermore the thick prods are a bit less efficient at releasing energy, but more energy can be stored by a crossbow. Traditionally the prod was often lashed to the stock with rope, whipcord, or other strong cording. This cording is called the bridle.

The strings for a crossbow are typically made of strong fibers that would not tend to fray. Whipcord was very common; however linen, hemp, and sinew were used as well. In wet conditions, twisted mulberry root was occasionally used. Crossbows have a shorter draw length than bows, resulting in the need of a greater amount of draw force in order to store the same amount of energy. Very light crossbows can be drawn by hand, but heavier types need the help of mechanical devices. The simplest version of mechanical cocking device is a hook attached to a belt, drawing the bow by straightening the legs. Other devices are hinged levers which either pulled or pushed the string into place, cranked rack-and-pinion devices called 'cranequins' and multiple cord-and-pulley cranked devices called windlasses.