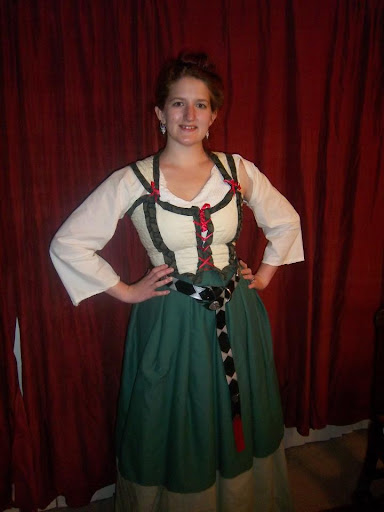 The lovely Lady Courtenay, known for her henna-red hair and whimsically vivacious demeanor, was dragged out to Crimson Wood quite a while ago by her then-boyfriend Mannanan, while he was still inhabiting the residence of Niveus and company. Though the miss decided that field play was not so much her thing, she grew to be a very involved and valuable member of the Color, applying her knitting and other textile-mantic powers to make some rather snazzy garb--not the least of which are her intricate court garb ensembles, and Mannanan's knitted Viking-esque helmet (complete with yarn horns!) and stein cozy.


She and Carmen have been known to engage in various forms of plottification, and her penchant for various forms of tea (including, of course, knitted tea cozies) has met with particularly pleased reception on cold days (Prometheus is one such ardent supporter).

She and Mannanan eventually did tie the knot, and great clamors of "aww" were indeed vocalized on account of their adorableness. Crimson Wood wishes them many happy returns.

Courtenay is a member of Tribe of the Wild Blood and the Aspirants to Glory.

The Lady was awarded her silver-trimmed belt at Westmarch Winter Coronation of 2011 by Sir Nakita, joining Mannanan and Niveus as belted family.

For her ongoing involvement, energy, and general all-around excellence, Courtenay was awarded the title of Lady during Flurbtastic Weekend in 2011, by Duke Niveus.