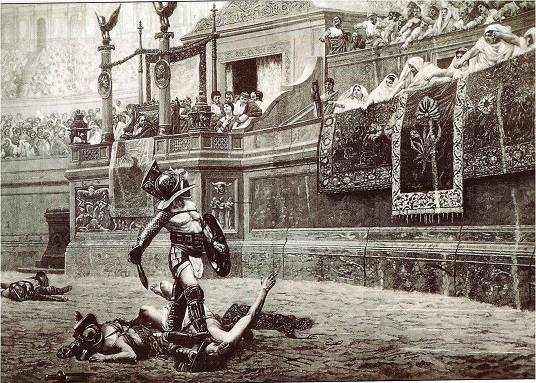 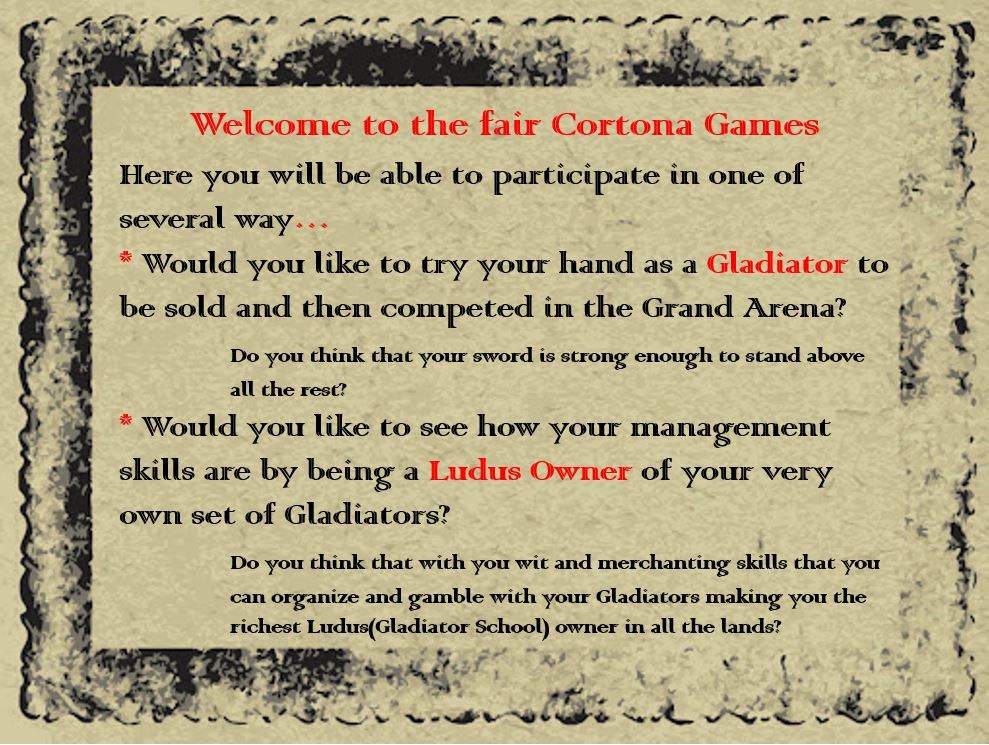 As a gladiator, you are a weapon in the house of your Ludus Owner. It is only your job to do as told(in fighting). Your Ludus owner will negotiate your weapon style, combat style, and opponent(s).
As a Gladiator, your only responsibility will be to fight when told by your Ludus owner. You do not have to attend to anything beyond your fighting responsibilities. (Although you may RP the gladiator/owner as much as you wish) The only responsibility you take as being a gladiator: If your Ludus owner comes to you saying that they have arranged a fight and they need you to participate... You must do all you can to drop whatever you are doing to compete in the bout your owner setup. A Gladiator may not be 'Killed' outside of the confines of a 'Blood Sport' gladiatorial challenge (i.e. random backstabbing during event)

Ludus measure of success is in 'Tokens', which are your monetary system where you can wager on the success of your Gladiator. As Ludus owner you are allowed to negotiate terms where your gladiator will compete against gladiator from another Ludus As owner, you have options to determine what type of Combat Style your gladiator will compete in There are no regulated terms, that is all worked out between the Ludus owners.

If all your Gladiators die, but you still have tokens, then you can bet and try to reclaim new gladiators via trade or purchase.

We want to encourage potential Ludus owners to purchase more than just 1 Gladiator When someone wins a bid for a Gladiator, they must pay for that Gladiator immediately upon the closing of the Bid... If the Ludus owner does not have the money on hand, then the Gladiator goes back on the block to be auctioned to someone else.
Along with any Gladiator that is won through the bidding process, the winner will also get tokens in the same amount of that which they spent for purchase (i.e. purchased Gladiator for 7$, then you get 7 tokens) Once you have purchased all of the Gladiators that you are interested in, then you have your Ludus and may begin scheduling fights between your Gladiators and that of Gladiators in other Ludus's

A token will be provided to initial purchasers of Gladiators at time of bidding close. When the new Gladiator owner goes to pay for his/her Gladiator(in US dollar) Logistics will hand him/her that many tokens in return.

Since everyone will be starting off with different amounts of tokens depending on how much they donated and we dont want someone to be able to "buy" the Grand Ludus Owner prize, everyone's net worth starts at 0, and only positive tokens count towards the net growth that is used as the gauge for Grand Ludus Owner.

This way its about how well you use what you have to grow your tokens by managing smart fights for your Gladiators. If you just count "Ending Tokens", Player 3 wins because they donated the most. If we go by the "Net Growth" number, then it evens the playing field for all of the Ludus Owners in a more evenly matched game.

Ludus owners may engage their Gladiators in combat in 1 of 2 ways.

^Non-Fatal – Regardless of Win/Lose, the gladiator is still ‘alive’ and may be used for future combat
^^Fatal - The losing Gladiator is DEAD, out of the game and not usable for future combat in the games
(NOTE: All Blood Sport must be fought in the ‘OFFICIAL ARENA’)

If you miss the initial bidding and/or do not purchase a Gladiator, all is not lost.

Once you have tokens you may use them to place bets on gladiator fights, to try and purchase gladiators, donate to a particular Ludus.

(NOTE: must have 1 or more living gladiators at closing to be considered a Ludus owner)