Show your Fealty to the Crown! 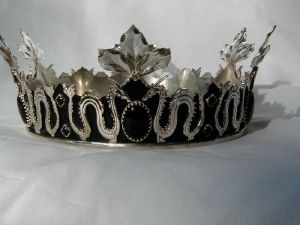 Example of a Dux Coronet

A crown is the traditional symbolic form of headgear worn by a monarch or by a deity, for whom the crown traditionally statue power, legitimacy, immortality, righteousness, victory, triumph, resurrection, honour and glory of life after death. In art the crown may be shown being offered to those on Earth by Angels. Apart from the traditional form, crowns also may be made of for example flowers, stars, oak leaves or thorns and be worn by others, representing what the coronation part aims to symbolize with the specific crown.

A coronet is a small crown consisting of ornaments fixed on a metal ring. Unlike a crown, a coronet never has arches. The word stems from the Old French coronete, a diminutive of co(u)ronne ("crown"), itself from the Latin corona (also "wreath").

Traditionally, such headgear is – as indicated by the German equivalent Adelskrone (literally "crown of nobility") – used by nobles and by princes and princesses in their coats of arms, rather than by monarchs, for whom the word crown is customarily reserved in formal English, while many languages have no such terminological distinction. Other than a crown, a coronet shows the rank of the respective noble. Hence, in German language there is also the term Rangkrone. 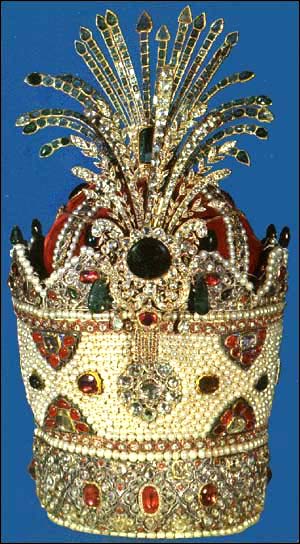 The Crown in Amtgard

1.Slang for the Monarchy usually of a kingdom.

2. The object itself. A metal band or headdress used to signify station.

At the kingdom level it is the duty of the outgoing Monarch to dismiss their staff; Champion, Regent, Captain of the Guard ect. The Regent should be decrowned last. Then the standing Prime Minister will typically take into custody all the symbols of office for the other positions, and then Finally dismiss the out going monarch. Then the PM crowns the new monarch or the monarch and consort. The new Monarchy then introduce their guard, Champ, Herald, Jester Scribe and any other positions they might have filled.

Each kingdom has it's own traditions and variations. If you are concerned about following the old ways then ask before you chose the order of dismissal and crowning. If not then, hey, it is your reign. 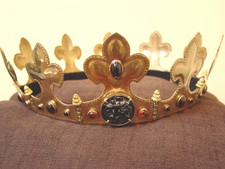 Coronets in Heraldry and Britan

leather coronet made by Gorin

The main use is now actually not on the head (indeed, many people entitled to a coronet never have one made; the same even applies to some Monarchs' crowns, as in Belgium) but as a rank symbol in heraldry, adorning a coat of arms. In the United Kingdom, a peer wears his or her coronet on one occasion only: for a royal coronation, when it is worn along with coronation robes, equally standardized as a luxurious uniform. In the peerage of the United Kingdom, the design of a coronet shows the rank of its owner, as in German, French and various other heraldic traditions.

This system was introduced through the Amtgard Heraldry Registration Project as a potential system for use by nobility within the context of Amtgard.

Since a person entitled to wear a coronet customarily displays it in their coat of arms above the shield and below the helm and crest, this can provide a useful clue as to the owner of a given coat of arms. 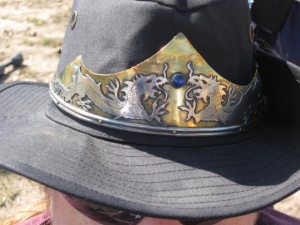