(Redirected from Circle of Knights)

A meeting of the knights of Amtgard

The Knight's Circle is the body which watches and helps to recognize up and coming knights. They keep tabs on those that are close to the title and give their recommendations to the Monarch, who even if they are not knighted sits in on the circle. In most kingdoms, with the notable exception of the Wetlands, the Circle only recommends candidates. In the Wetlands the power to knight rests with them as well. 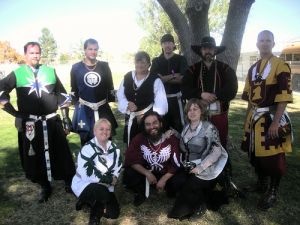 Knights meetings generally occur every three months though this may vary from Kingdom to kingdom. Some kingdoms hold their meetings at events and others before events. The Wetlands usually holds their's at a bar or restaurant in the Houston area, but the CK holds theirs on the Saturday morning of Coronation and Midreign.

Role of the Guildmaster of Knights in the circle.

The GMoK arbitrates the knight's circle, and keeps a listing of the up and coming candidates. In most cases they also set the times and dates for knight's meetings. It is their base role to keep the conversation moving in a positive way, holding the votes and making notes.

Sitting in on a meeting.

This is either very relaxed or very strict. If a person who is not a knight would like to 'sit in' on a circle meeting they or their Liege must ask the circle for its permission. In some kingdoms this is usually granted in others it is not, and in rare cases you must ask the monarchs permission instead. Ask your local knights what their policy is.

The first rule of the knight's Circle is that no one talks about the knights circle. The second rule is... you get it. What is said in the circle is not intended to be common knowlege, unless explicitly stated as such.