A Defunct chapter of Emerald Hills, located in Dallas, Tx. 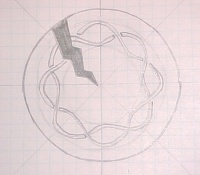 Clu has a vision about a park that was started, long forgotten, and detached from all current Amtgard named "Broken Shield". The park's numerous members were welcoming as they played at the park into dusk and beyond. Clu would tell this dream that was more than likely inspired by memories of 1990 Keist Park Ironcloud mixed with the previous night's pizza to friends in college. Inspired by the dream, and his friends never having heard of Amtgard, a small park was formed in between the 1995 Fall and 1996 Spring semesters.

The park averaged roughly five people, usually mostly barbarians and one Archer. In the end the Amtgard group in a bible thumping Seventh-Day Adventist town of Keene, TX went surprisingly well, but ended when classes resumed for the 1996 Spring semester.

The first truly notable variation of Broken Shield was a Sunday park in the heart of Dallas, at White Rock Lake Park. It was formed by Yoni and Elder. Yoni wanted a Sunday park in Dallas as he could not attend Saturday parks, and Elder wanted a closer Sunday park so that he and his friends could play Amtgard on both Saturday and Sunday.

At the EH event before its first meeting, the founders asked for suggestions for the name of the new park. Clu suggested Broken Shield. He said that name had come to him in a vision during his Knighting Vigil on December 14, 2002. Clu would be pleased with the results.

This park is no longer active. For information on other chapters in Amtgard look here