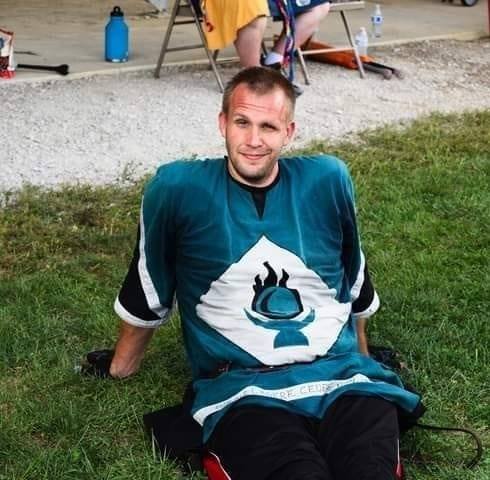 Bighead started Amtgard in (2003?) when his (English) teacher, Crux, started bringing his students out to Amtgard.

Bighead has since outlasted Crux, and has grown into a valuble member of the park.

"Bighead's original Amtgard name was "Saetta Folgore", but the park changed his name because they thought he had a big head." -Tanath

Actually, his name came about from his tendency to have swords broken on his face with alarming regularity as a n00b.

"I don't believe that. I mean, come on, the evidence wobbles on your neck". -Tanath

"You don't have to believe it. Ask your man at arms for the truth, and, if he lies, then trust in the fact that I have a size medium helmet...my family actually has remarkably small heads for our size." -Bighead

"Penis girth has nothing to do with this" -Tanath

He was formerly known for constantly using a two-handed sword and a dagger. He has since grown out of that habit. (No he hasn't - now he just uses a Zulu)

Former man at arms to Konrad