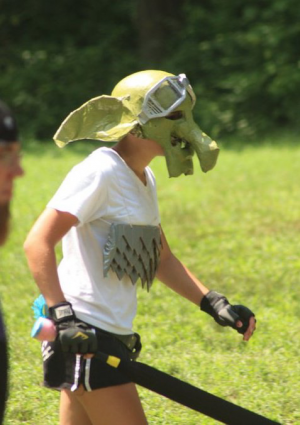 Bepa Novosi started playing Amtgard in November of the year of our Lord two-thousand and ten. She began her adventures in the Duchy of Madoc's Keep of Louisville, Ky as Jess-ter, and changed her name in December of the year of our Lord two-thousand and twelve. The hottest chick in Amtgard, she is often seen in spandex shorts or period-accurate miniskirts. Bepa frequents the ditch field, Florentine being her weapon style of choice. On the sidelines, she tries to spar with fighters greater than her in hopes of gaining the skill she needs to become the first female Warlord of the Rising Winds.

The only thing distracting Bepa from that goal currently is her desire to do EVERY CRAFT EVER. She has novice skill in making garb and acrylic painting, and has dabbled recently in wood burning, found object sculptures, leather working, cardboard construction, and wood working with a scroll saw.

Cyclone given by Twilight S. Moon, April 2011 The Deathstrike given for notable prowess during Assassination game, March event 2013.