A banner is a flag or other piece of cloth bearing a symbol, logo, slogan or other message. Banner-making is an ancient craft.

Artists rendering of an Oriflamme

The word derives from late Latin bandum, a cloth out of which a flag is made (Latin banderia, Italian bandiera). German developed the word to mean an official edict or proclamation and since such written orders often prohibited some form of human activity, bandum assumed the meaning of a ban, control, interdict or excommunication. Banns has the same origin meaning an official proclamation, and abandon means to change loyalty or disobey orders, semantically "to leave the cloth or flag".

In heraldry, an heraldic flag is any of several types of flags, containing coats of arms, heraldic badges, or other devices, used for personal identification. Heraldic flags include banners, standards, pennons and their variants, gonfalons, guidons, and pinsels. Specifications governing heraldic flags vary from country to country, and have varied over time.

Rectangular personal, military, and national flags are sometimes referred to as "standards" or royal standards; these should be distinguished from the heraldic standard, which is a different, specific shape.

The heraldic standard appeared about the middle of the fourteenth century, and was in general use by personages of high rank in the two following centuries. The standard appears to have been adopted for the special purpose of displaying badges. "The badge was worn on his livery by a servant as retainer, and consequently the standard by which he mustered in camp was of the livery colours, and bore the badge, with both of which the retainer was familiar."

A standard is not rectangular. It tapers, usually from 120 cm down to 60 cm and the fly edge is rounded (lanceolate). In England any armiger who has been granted a badge is entitled to fly a standard.

The medieval English standard was larger than the other flags, and its size varied with the owner’s rank. The Cross of St. George usually appeared next to the staff, and the rest of the field was generally divided per fess (horizontally) into two colours, in most cases the livery colours of the owner. "With some principal figure or device occupying a prominent position, various badges are displayed over the whole field, a motto, which is placed bend-wise, having divided the standard into compartments. The edges are fringed throughout, and the extremity is sometimes swallow-tailed, and sometimes rounded."

Flags and Banners by shape 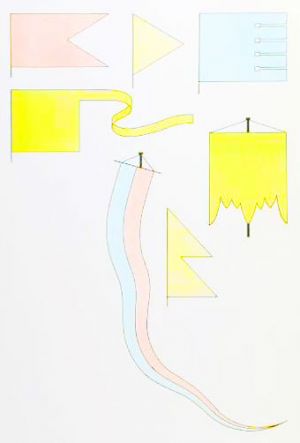 Burgee
Burgee is the name of the distinguishing flag, regardless of its shape, of a recreational boating organization Yacht clubs and their members may fly their club's burgee both while underway and at anchor (however, not while racing). Traditionally, the burgee was flown from the main masthead, however it may also be flown from a small pole on the bow pulpit, or even the starboard rigging beneath the lowest starboard spreader on a flag halyard.


Ensign
A flag used at sea to denote nationality - or the national flag for use at sea - and whose usage falls into one of the several categories listed separately below. The ensign is generally displayed on a staff at the stern of a vessel, or from the peak of the gaff of a sailing vessel if so rigged or two-thirds up the leech of the mainsail if not, and in the case of a naval ship, from either an ensign staff or from the rigging, with this latter usually depending on operational requirements and covered under peak

Gonfalone
A gonfalone or gonfalon is a vertically hung banner emblazoned with a coat of arms. Gonfalons have wide use in civic, religious, and academic heraldry. The term originated in Florence, Italy, where communities, or neighborhoods, traditionally displayed gonfaloni in public ceremonies.

Gonafanon
A war flag of pre-heraldic Europe, often tapered from hoist to fly, generally attached to a lance and ending in from two to five squared, rounded or triangular tails.

Guidon
The Scots guidon is similar shape to the standard and pennon. At 2.40 metres long, it is smaller than the standard and twice the size of the pennon. Guidons are assigned by the Lord Lyon to those individuals who qualify for a grant of supporters to their Arms and to other individuals who have a following such as individuals who occupy a position of leadership or a long-term official position commanding the loyalty of more than a handful of people. The Guidon tapers to a round, unsplit end at the fly.

Jack
A small usually square or slightly rectangular flag flown just above the Ensign on a ship. A bow flag. Commonly used on military vessels, not normally for privet or civil use.

Jolly Roger
Generically, any black flag bearing white symbols and associated with piracy, but usually shown in its modern form as a flag with black field and stylised white skull above two white crossed bones - a skull and cross-bones. Originally Pirate flags leaned more to red than black, Jolly roger is a corruption of 'Jolly Rouge'.

Khanda
A blue emblem, usually on a triangular pennant with saffron field and symbolic of the Sikh religion.

Nobori
literally meaning 'banner', had a more specific meaning on the battlefields of feudal Japan. It referred to a particular type of banner denoting units within an army; nobori became much more common in the Sengoku period, coming into use alongside the earlier hata-jirushi. They were long, narrow flags, attached to a pole with a cross-rod to hold the fabric straight out and prevent it from furling around the rod; this way, the flag would always remain visible and identifiable. Though usually used to represent different divisions within an army, nobori were sometimes made identical, so as to produce an impressive and intimidating display of warrior flags.

Oriflamme
It was originally the sacred banner of the Abbey of St. Denis, a monastery near Paris. The banner was red or orange-red and flown from a lance. It was suggested that the lance was originally the important object, with the banner a decoration - but that this changed over time. Its colour stems from the legend of it being dipped in the blood of the recently-beheaded St. Denis. Although the azure ground (blue background of St. Martin of Tours) strewn with gold fleur-de-lis remained the symbol of royalty until the fourteenth century, the Oriflamme became the royal battle standard of the King of France, and it was carried at the head of the king's forces when they met another army in battle.

Pennon
Pennon comes from the Latin penna meaning "a wing" or "a feather." It was sometimes pointed, but more generally forked or swallow-tailed at the end. In the 11th century, the pennon was generally square, one end being decorated with the addition of pointed tongues or streamers. The pennon was a purely personal ensign. It was essentially the flag of the knight bachelor, as apart from the knight banneret, carried by him on his lance, displaying his personal armorial bearings, and set out so that they stood in correct position when he couched his lance for charging. A Pennant is a variation usually flown by ships. Pennons and Pennants come in many further types. Could be called a 'Lance Flag'.

Pinsel
The Scottish pinsel is triangular in shape, 60 centimetres high at the hoist and 135 centimetres in width tapering to a point. This is the flag denoting a person to whom a Clan Chief has delegated authority for a particular occasion, such as a Clan Gathering when the Chief is absent. This flag is allotted only to Chiefs or very special Chieftain-Barons for practical use, and only upon the specific authority of the Lord Lyon King of Arms. 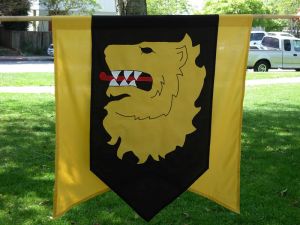 Sashimono
small banners worn by Japanese medieval soldiers for identification during battles. The sashimono are usually fitted to the backs of common soldiers, known as ashigaru, to elite samurai, and in special holders on the horses of some cavalry soldiers. The designs on sashimono were usually very simple geometric shapes, sometimes accompanied by Japanese characters providing the name of the leader or clan, the clan's mon, or a clan's slogan. Often, the background colour of the flag indicated which army unit the wearer belonged to, while different divisions in these armies emblazoned their own design or logo on it.

Schwenkel
A form of flag where a rectangular or triangular tongue extends from the upper fly corner of the flag, or where it has a strip along its top edge that extends beyond the fly to become a tongue. 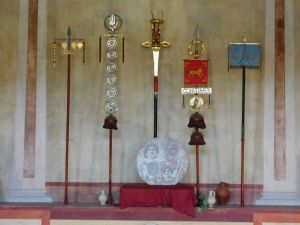 Roman military banners and regalia, the Vexillum is the red one

Vexillum
(plural vexilla) was a flag-like object used in the Classical Era of the Roman Empire. The word is itself a diminutive for the Latin word, velum, sail, which confirms the historical evidence (from coins and sculpture) that vexilla were literally "little sails" i.e. flag-like standards. In the vexillum the cloth was draped from a horizontal crossbar suspended from the staff; this is unlike most modern flags in which the 'hoist' of the cloth is attached directly to the vertical staff. The bearer of a vexillum was known as a vexillarius. Just as in the case of the regimental colors or flag of Western regiments, the vexillum was a treasured symbol of the military unit that it represented and it was closely defended in combat.